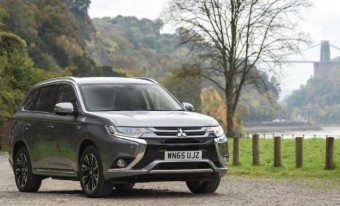 The new Mitsubishi Outlander PHEV is powering sales and jobs.

Lord Mayor of London Boris Johnson on a trade mission to Japan unveiled the new Outlander range last week in Tokyo. The headline model and by far the best selling version in the range has been the PHEV plug in petrol/electric hybrid. Following last week’s reveal in Tokyo the UK’s motoring media were able to test drive the new 2016 models in Bristol this week. Aptly Bristol is the European Green Capital of the Year 2015 and home of Mitsubishi’s import centre at the city’s Portbury Dock.

Such has been the UK sales success since it was launched in 2014 the Outlander PHEV petrol/electric plug-in hybrid has averaged 1,000 UK registrations a month. For the first nine months of this year 9,303 have been sold and this accounts for half of all plug-in vehicle sales in the UK.

The UK is now the largest market in the World for the Outlander PHEV overtaking Japan where it is built, followed by The Netherlands, Sweden, Germany and Norway, countries where there are tax advantages for running low emission vehicles.

In the UK sales of such plug-in hybrid vehicles have risen by 226.5% to 14,041 so far this year. Around 21,000 UK motorists this year have also changed to either plug-in hybrids or electric vehicles with the Outlander PHEV topping the overall sales chart of such vehicles.

Mitsubishi said, “The Lord Mayor’s initiatives such as an ultra-low emission zone in London by 2020 and his drive for more plug-in vehicles have contributed to the success of the Outlander PHEV encouraging us to bring more such vehicles to the UK so attracting investment, skills and jobs into a vitally important emerging vehicle sector.”

Mitsubishi Motors UK has announced that due to the success of the Outlander PHEV with more plug-in hybrid models now confirmed to be added to their range in the future, already 400 new jobs have been created in this country and this will grow to over a 1,000 in the next three years.

The new jobs include network sales people with specialist skills in ultra-low emission vehicles, additional people at their UK headquarters and more staff to prepare cars once they arrive at their import centre at Portbury, Bristol. The company has already committed a £48-million investment to their import centre.

Since the original Outlander design was first shown in 2001 over 1.28-million have been sold globally, the first generations with petrol and diesel engines and followed by the PHEV versions.

In the UK 21,142 Outlanders of all types have been sold equating to 36% of the brand’s total sales and it is now their best selling model range overtaking the previous best selling L200 pick-up range.

Toby Marshall, Sales and Marketing Director for Mitsubishi Motors UK said at the media launch in Bristol, “The Governments £5,000 plug-in grant enables us to offer the Outlander PHEV at the same price as the equivalent vehicle with a diesel engine. We expect to sell 12,000 PHEV versions in the UK this year and 3,000 turbodiesel vehicles.   The sales split is 60% for fleet and business users and 40% to retail customers.” 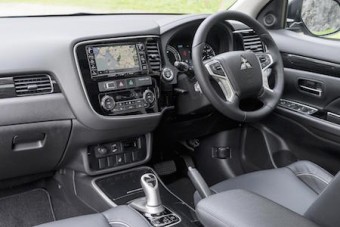 With its seamless transition between hybrid and pure electric modes it has a combined hybrid range of more than 540 miles  with a pure electric driving range of officially 32 miles, enough to accommodate average daily commuter distances and the hybrid system allows to batteries to be recharged on the move. The plug-in petrol/electric hybrid system does away with the ‘range anxiety’ associated with pure-electric vehicles say Mitsubishi. The low CO2 emissions of42g/km, reduced from 44g/km in the previous version, means the vehicle is exempt from the London Congestion charge, it is VED road tax free and company car users will pay 5% in Benefit-in-Kind tax.

Finally the official Combined Cycle fuel consumption is 156mpg which has been improved from the 148mpg figure of the previous models.

The new third generation Mitsubishi Outlander range with a PHEV 2.0-litre petrol engine plus two electric motors and its plug-in electric facility with seating for five is priced from £29,249 for the GX3h auto after the Government’s £5000 grant has been applied.

All diesel and PHEV models are 4WD, the diesel versions have manual and auto gearbox options, the PHEV versions are automatics.

In addition to improving the efficiency of the petrol/electric drivetrain and introducing a new 2.2-litre diesel engine option, the other changes for the new 2016 Outlander range include   revised styling, much needed interior quality improvements, higher specification, improved ride and handling and lower noise intrusion levels.

Other styling tweaks to the side reduce the previous slab-sided image and the vehicle looks lower, leaner and wider.  There is also a new bumper design at the rear adding to the 40mm increase in overall length. Overall it looks more refined.

Inside the improvements are even more noticeable and are more in keeping with the requirements of the European market rather than the plainer ones of the Japanese domestic market.

The plastic trim looks and feels  of a higher quality, the leather upholstery is of a higher grade, the seats offer greater padding and are more comfortable, the centre console and other trim inserts have a ‘black ash’ design and there are chrome inserts to brighten the overall ambience and there is ambient lighting for the floor area.

The controls are more intuitive with less buttons and the new Multi Communication System has a better start-up time of 15-seconds, the LED headlights have auto levelling and the rear tailgate opens higher.

Improved insulation throughout and in the wheel-arches, increased glass thickness and more weather strips around the doors significantly reduce interior noise intrusion.  The suspension has also been revised to provide a more compliant ride with less body roll and the active yaw control contributes to its sure-footedness.

With its extra performance and improved ride characteristics both the PHEV and diesel versions of the new Outlander feel more alert, responsive and agile in their driveability.

The best selling GX4h level’s additions include 7.0-inch sat-nav with DAB radio and reversing camera, electric tailgate, sunroof and heated front seats.  That level can be added to with the GX4hs which includes a 360-degree camera and unintended acceleration mitigation system that basically is front end radar which stops the driver driving into another vehicle or wall by putting their foot on the accelerator instead of the brake. 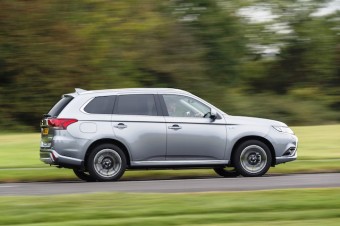 I have written about the technology driving the Outlander PHEV before and the basics are the same but the efficiency and performance has evolved. In short the 2.0-litre four cylinder 200bhp petrol engine is supported by two electric motors, one in the front and one at the rear with drive to all four wheels through and automatic gearbox.  The vehicle can also be driven on and off road in electric mode only.  Using battery power only the driving range can be up to 32 miles, more than enough for the average daily commute which is 25 miles according to official UK industry figures. These users will rarely visit a petrol station and will use a 13-amp electric supply at home for the five hour battery charge.

Using a rapid charger at home or at service stations an 80% charge takes just 30 minutes.

Using both battery and petrol modes the cruising range is 540 miles which is on par with non-hybrid diesel models.  Officially using battery/petrol modes the Combined Cycle fuel consumption is 156mpg and the CO2 emissions are just 42g/km. These have improved from 148mpg and 44g/km of the previous model.

During an short test driving session around the traffic gridlocked and potholed streets of a very rainy Bristol, and the more leisurely roads over the Clifton Downs, the overall mpg figure was 1,412mpg.

Why that high? Because left to its own devices the vehicle used mainly pure electric mode.  You can see why some existing Outlander PHEV shorter distance commuter users do not visit a petrol station.

Realistically in the past my test drives of the previous generation Outlander PHEV the vehicle has returned somewhere between 60 and 90mpg in petrol/hybrid mode and in petrol only mode around 35mpg.

That last figure is comparable with the new 2.2-litre diesel powered Outlander which I also tried at the UK media launch using Somerset’s country roads and that returned 35.9mpg overall.

Everything about the latest generation Outlander is better than the outgoing versions as technology moves on. Thankfully other improvements in styling, equipment, interior quality, higher specification, handling and comfort have also improved.

The Outlander PHEV created the UK’s plug-in hybrid market and with its ultra low running costs and minimal taxes it should go on leading the way in this growing sector.

Against: Nothing of note.