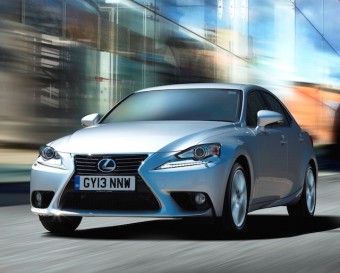 Less really is more with the Lexus IS hybrid saloon.

It arrived in the UK in July selling in a market sector dominated by diesel powered models such as the BMW 320 Efficient Dynamics, Audi A4 2.0 TDI and the Mercedes-Benz C220 CDI models.   But for this third generation IS saloon there is no diesel engine option or indeed the gas-guzzling 5.0-litre V8 petrol model.

The new line-up has just a 2.5-litre V6 petrol badged the IS 250 and coupled with an electric motor and called the IS 300h.

Lexus say it is their strategic direction for the brand not to have a diesel engine option – for now anyway as petrol hybrid running costs can more than match diesel models and the cost of hybrid powertrain technology is now significantly lower than they were.

This new IS sports saloon is the first IS to be equipped with the Lexus Hybrid Drive System. All models have an automatic transmission and are rear wheel drive.  The levels of equipment and specification for both power sources are SE, Luxury, F Sport and Premier.

UK sales of the IS  are expected to have an 80% bias towards business users most through a lease scheme with the 300h hybrid model making the most sense even though it is around £3,000 more expensive to buy than the IS 250 non hybrid version.

With CO2 emissions for the 300h ranging from 99 to 109g/km VED road tax is either free-of-charge all its life or at worst free for the First Year rate and then just £20 per annum for the Second Year onwards rate.

As a diesel powered competitor example, using the much praised BMW 320d Efficient Dynamics Saloon  priced at £28,410, the CO2 emissions are 109g/km  so VED road tax is £0 First Year rate then £20 and BIK company car tax  is 16%, that’s 3% higher than the Lexus IS hybrid because of the diesel fuel penalty.

Diesel fuel is also more expensive to buy  with the Lexus 300h officially returning around 60 to 65mpg for the official Combined Cycle  and the BMW 320d ED around 69mpg.

Of course there is the added comparison calculation to be made of the exclusivity value of owning/running a Lexus against a more common-place BMW 3 Series, a decision which can only be appreciated or valued by the customer.

I have just completed a spell in the new Lexus IS 300h with the  £38,495 top specification Premier version, not the best selling  £30,995 Luxury equipment level, but Premier spec does showcase the new IS range.

The exterior styling features a new interpretation of Lexus’s spindle grille design, giving the IS greater road presence and a stronger brand identity.  It looks a much more dynamic and sporting saloon with its combination of sculptured lines and sharper front end treatment including signature daytime running lights.  The new IS, at 4,655mm in length, is 75mm longer and 10mm wider than its predecessor.

The roomier accommodation has been achieved with a significant 85mm improvement in rear-seat knee-room thanks to the 70mm longer wheelbase; the boot has also been made larger and more user-friendly.

Because the hybrid battery is located beneath the boot floor occupying a space normally occupied by a spare wheel, there is 450 litres of load space (compared to 480 litres in the non-hybrid IS 250).

The profile of the new four door bodyshell adopts a sports coupe roofline and the upswept treatment for the rear section of the sills gives a look of ‘pace’ to the bodywork.

Despite the increase in overall length the doorframes feel tight for access and the headroom getting in and out of the car is not that plentiful for tall passengers. Front headroom once inside the car is good but tall rear passengers might find it snug. 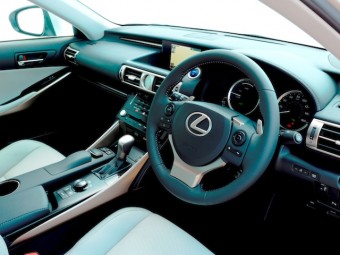 The interior is all-new too, while maintaining the refinement and quality that are fundamental to Lexus, but introducing a more sporting, focused environment for the driver. The fascia’s upper display area houses a seven-inch LCD multi-display screen, set at an ideal distance for at-a-glance viewing from the wheel.

The lower operation zone gives access to system controls, including Lexus’s second generation Remote Touch Interface. The new IS follows the latest GS and LS  models in adopting a Drive Mode Select system, and a change in meter illumination from blue to red when sports driving modes are engaged.

Lexus’s first electrostatic switches for controlling the air conditioning are located in the centre console, operated with just a touch of the finger.

Models are equipped (according to grade or option specified) with either the Lexus Media Display or Lexus Premium Navigation pack; the steering wheel is the first in a Lexus to co-ordinate multimedia system control with both meter and centre console displays.

My test Premier spec test car had leather upholstery with the usual power operated memory heated front seats but they also included fan cooling through the perforated seat material which was really useful in the recent hot weather.

Lexus claims the new IS’s driving dynamics have been engineered to help deliver  a better  and more involving driving experience, said to be a principal goal in the car’s development programme.  The handling certainly felt sharper and more controlled although the ride was on the firm side with the thumps and bumps of potholes transmitted inside the car and the road noise intrusion was very noticeable.

Some of this noise is due to the fact that the petrol/hybrid system is so quiet that others noises become more obvious and the large 18-inch wheels with low profile tyres do not promote quiet or smooth travel .

A new Drive Mode Select system lets the driver choose between up to five modes – Eco, Snow, Normal, Sport/Sport S and Sport S+ (the latter on the IS 300h F Sport fitted with optional Adaptive Variable Suspension) – to achieve their preferred balance of economy, comfort, performance and handling characteristics. On the full hybrid IS 300h there is also an all-electric EV mode.

As with all Lexus hybrids, the new IS 300h is a full hybrid that can be driven in petrol or purely electric modes alone, as well as a combination of both. Its Lexus Hybrid Drive features a new 178bhp, 2.5-litre, four-cylinder petrol engine with 163lb ft of torque mated to a compact, high-output 141bhp/221lb ft water-cooled permanent magnet electric motor. The two powerplants, both independently and in tandem as required, drive the rear wheels.

The hybrid combination of the petrol engine and electric motor seamlessly harmonise but without giving the urge afforded by a new generation sports turbodiesel or turbocharged petrol units which are now common in the premium brands in this segment.  Pushed hard in Sport modes the engine stills feels ‘flat’ and become noisy. In a more relaxed driving mode the hybrid system is hushed and smooth and the electronic CVT auto transmission works well enough. In short it’s more ‘classy refinement’ than ‘sporty’.

Of course the fuel use was significantly better when the electric motor had an opportunity to play its part, such as urban and country road driving. But on motorways, where there is limited input from the electric motor, the fuel economy was considerably reduced.

Hybrids I’ve found work but there are compromises which new-age turbodiesels do not have. If it’s driving endless business miles on a motorway, the hybrid looses out to diesels.

If it’s more commuter driving with plenty of stops and starts and 40 to 50mph ‘speed up – slow down’ travel – hybrids wins. The winner overall for hybrid use is of course the company car/business user-chooser driver who will pay far less in personal tax.

Against: Firm ride on the large wheels specification, no spare wheel, foot operated parking brake, not as fuel efficient overall for all types of driving conditions as a modern turbodiesel.