The brakes have gone on hard for sales in Britain’s car showrooms.

UK new car registrations fell -24.3% in June, according to the latest figures released today by the Society of Motor Manufacturers and Traders with 140,958 new vehicles registered, the weakest June performance in 26 years. 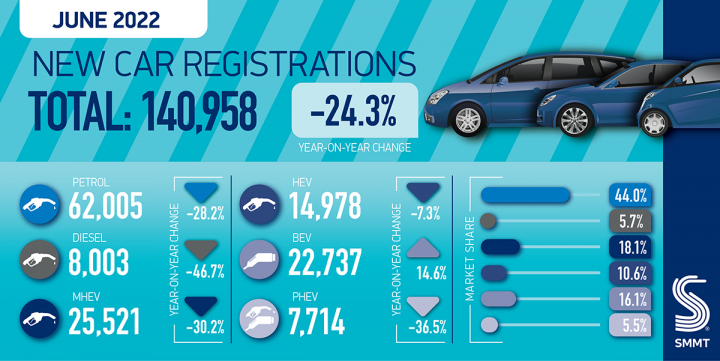 Battery electric vehicles (BEVs) continued their growth streak, however, with a 14.6% increase in volume, as market share continued to grow, reaching 16.1%, up from 10.7% a year before. Conversely, plug-in hybrid vehicle (PHEV) uptake fell by 4,425 units to take a 5.5% market share.

Some 107,894 fewer new cars have been registered during the first half of 2022 compared with the same period last year – despite 2021 demand being restricted by dealership lockdowns until April, with consumers only able to buy vehicles through click and collect.

Looking ahead, James Fairclough, CEO of AA Cars, said,“If the first half of 2022 has been haunted by the spectre of poor supply, the question for the second half of the year is how Britain’s slowing economy will impact demand.

“Thus far drivers’ desire for new cars has held up well, but it may cool as the cost of living crisis bites deeper and more consumers opt to postpone big ticket purchases.

“The quest for better value has led many prospective buyers to switch their focus to the second-hand market, and many dealers report that sales of used vehicles are outpacing those of brand new models.

“In the current fragile market, used cars have a clear advantage over their brand new rivals – availability. We’ve seen this first-hand on the AA Cars website, with many would-be buyers using our platform to shop for a used vehicle that’s available to drive away today.

“While strong demand has pushed up second-hand prices, there are some competitive used deals to be had, particularly for buyers who do their research and consider searching outside their local area.”

The SMMT’s data on new car registrations, shows that electric car sales are around 16%, putting the UK close to the  government’s target two years early.

Environmental group Transport & Environment has called on the government to increase its ZEV mandate – a UK Government drive to force car makers to sell a fixed percentage of electric cars as part of their overall production by 2030 – to 34% in 2024. The target is currently 22%.

Matt Finch, UK director at T&E, “Electric car sales are soaring. In the next few months, sales of EVs are set to eclipse the government’s target two years early.

“This gives carmakers a free pass for years. If the government wants to be a climate leader, it should raise its ZEV mandate target to at least a third of new sales in 2024.”