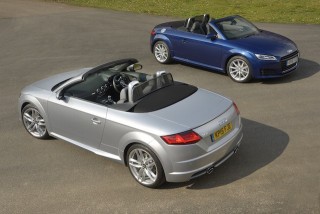 The car which underlined style has just got edgier.

The third-generation Audi TT Roadster now on sale boasts more in-car technology and greater efficiency from its powertrain while delivering greater agility in the driver’s hands.

It’s down to a reworked aluminium and steel hybrid platform which is surprisingly light and comes with the most advanced engines and transmissions and sitting on carefully retuned suspension.

At launch there are 2.0 TFSI 230PS petrol engines with front or all wheel Quattro drive and a 184PS 2.0 TDI diesel only in two wheel drive.

There are Sport and S line Roadsters with three-layer fabric hood which electrically folds away into its own compartment and leaves the boot with 280 litres space. 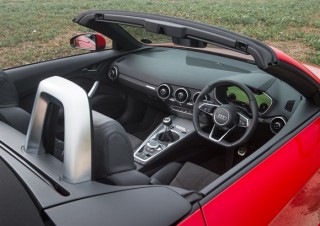 The new Audi TT is a styling evolution from the second generation but also incorporating elements from the big-brother R8 sportster, and it is about the same size as the previous generation with a slightly longer wheelbase. It is inside that the newcomer is different with a virtual cockpit LCD display instead of the usual analogue dials offering two visual modes depending on the driver’s preference. You can even specify in-car internet connectivity.

In a first for Audi, the Roadster’s seat belts incorporate small microphones close to the shoulder to give better sound reproduction for telephone calls.

Sport models have a sophisticated infotainment system while S line versions get LED head and tail lights and you can order the more expensive versions with sports suspension and lower ride height to match the larger 19-inch alloy wheels.

For the first time the refined Quattro system comes with selectable driving dynamics to modify the responses of various functions including transmission and suspension parameters.

At the same time, the Audi TTS Coupe with 310PS engine has been added to the hard-top range introduced a few months ago.

It’s available with 2.0 petrol engine, six speed manual or S-tronic box from £38,790 to £40,720 with LEDs, magnetic ride control, and drive select as well as the virtual cockpit.

The two new high performance Coupes join the ten-car Roadsters with insurance groups rising from 34E to 44E and there is currently a six months waiting list for deliveries.

Audi anticipates about 80% of TT Roadster sales will be to private buyers, the majority females drivers and their average age based on the outgoing series is between 35 and 45 years.

It is the only sports car in the sector to offer hard-top or soft-top versions and while a strict two-seater it is roomy and has a useful boot unencumbered by the roof tray compartment. 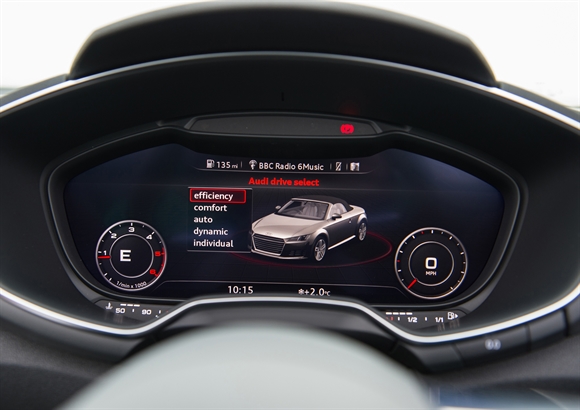 Apart from the virtual instrument display which switches at the touch of a button to show main gauges or an expanded map view and smaller dials I liked the turbine-look of the air outlets and the sensible placing in their centres of the heating and air conditioning controls.

The driving position is highly adjustable and snug with all controls falling to hand and foot as they should and the virtual instruments display is pin sharp.

The 2.0 petrol engine is very smooth and quiet and the front wheel drive puts down the power without drama. On a brief test we averaged 35.6mpg.

There was more urge under foot with the 2.0 diesel once it got going and despite being 46ps down on its sibling the 45.2mpg recorded more than compensated.

I thought the diesel produced more road noise but mechanical noise and wind noise with the roof down was low in both versions.

Handling is very responsive and helped by the drive select ability to match roads and driver rationale with excellent visibility and power delivery.

The Audi TT is the most popular model in its sector and there is no doubt the new third generation will follow in the tyre tracks of its forebears.