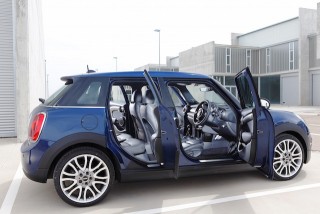 Of the all-new three and five door Hatch models the 3-Door Hatch is expected to still appeal to 60% of UK customers due to its heritage, price and size.

This could change in the longer term as it is usual in this ‘supermini’ sector for five door models to be more popular than three door versions. Competitors include the Audi A1, Peugeot 208, Ford Fiesta, Vauxhall Corsa and VW Polo.

The extra two doors give easier access to the rear seats but they are small. Due to their increase in size 5-Door Hatch models are an average 60kg heavier than their three door counterparts. The five-door models also have more headroom front and rear than the three door MINI and also more than other main competitors in the ‘supermini’ sector.

The extra length also results in the 5-Door Hatch having a larger boot of 278-litres, 67-litres more than the three door versions.  The new model has a 60/40 split folding rear seat for additional load and passenger carrying flexibility. There is also now a third seatbelt for the rear so it could be considered a five-seater but the centre position is really cramped.

Whereas the 3-Door Hatch has appealed to young singles or couples without children, the five door versions are expected to appeal to young families or empty nesters.  The three-door models have a female bias to ownership but it is anticipated the five-door models will have a slight bias towards male drivers. 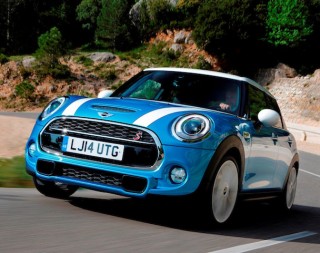 The 5-Door MINI Hatch range will eventually mirror the 3-Door Hatch line up in terms of models but initially there are Cooper, Cooper D, Cooper S and Cooper SD petrol and diesel versions with One and One D production due to start in November.

This fast revving units zips out 136hp with 220Nm of torque from only 1,250rpm.  Those figures speak for themselves and the engine is smooth for a three-pot.  Thanks to its TwinPower turbo technology its lively mid to top range and responsive low to mid range so there is no performance drawback in it not being a four cylinder engine.

With the extra length and two doors I definitely felt the MINI 5-Door Hatch has become a more substantial vehicle so it needs a willing engine.  It is mated with a six-speed manual gearbox with well spaced ratios for this engine but the gearchange was on the notchy side.  For driver assistance there is a gear-change prompt and a Driving Modes function operated through a rotary switch at the base of the gearlever used to select either the default Mid, Sport or Green modes.  My test driving was done mainly in Green mode with the other two selected briefly just to feel the difference in the accelerator and steering responses.  The fact that most of my test driving was done in the Green mode made the real life fuel consumption figure even harder to understand. 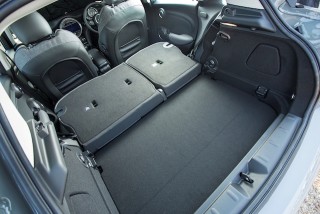 I have to disappointingly say that my relatively gentle short test drive using the winding and busy Cotswold roads returned a poor 32.7mpg. It seems the case that in most instance that three cylinder engines have to be worked harder that ‘fours’ hence the real-life fuel economy is underwhelming.

With its increase in weight and length perhaps the 5-Door Hatch is not just as ‘flickable’ as the original British Mini or any of the BMW MINIs from 2001 onwards but the interior quality is probably the best of all time.

It really feels like a compact BMW and of course it is because both brands now share versions of this new front wheel drive platform, the engines and premium quality of the interior fixtures and fittings.

It is really a BMW in all but name but now with more doors, more style this MINI has more possibilities for more customers.

Against: Gets very expensive with options added, larger wheels cost more, increase running costs and give an even firmer ride, test drive fuel economy much lower than the official figures.