You are here: Home / First Drives / Mitsubishi Outlander really is a game changer

The new Mitsubishi Outlander really is a game changer returning up to 2,824mpg.

4x4s, SUVs, dual purpose and crossover vehicles, call them what you will, continue to grow in popularity with sales continuing to increase in the UK.  Their sales have grown by 49% in the last two years to become the third largest sector in the UK’s new car market with close to 248,000 registrations in 2013.

In the past they have been classed as anti-social gas guzzlers but now the gas guzzler image  can be removed by the new Mitsubishi Outlander 4×4 PHEV.  Mitsubishi’s claim that the newcomer is a game-changer in the automotive world is probably true.

The headlines are all about figures. The Outlander PHEV is a 4×4, five door, five seater plug-in hybrid electric vehicle with a 2.0-litre petrol engine and two electric motors, one driving the front wheels the other the rear wheels. Mitsubishi says it is the only plug-in hybrid on sale in the UK that does not carry a price premium for its hybrid technology.

Customers can choose between the classic 2.2-litre diesel Outlander GX3 auto or the new PHEV hybrid version for the same price of £28,249, after the Government’s £5,000 Plug-In Car Grant has been applied.

There are two other Outlander PHEV variants, the GX4h priced at £32,899 and the GX4hs at £34,999 after the Government grant has been applied.  These versions are just £1,000 more than their diesel equivalents due to the added specification – not the PHEV equipment says Mitsubishi, but extra specification.

EV is an all-Electric Mode in which the front and rear motors drive the vehicle using only electricity from the 80 cell lithium-ion under floor battery pack.

A petrol engine was chosen because it gives less particulate emissions than a diesel and doesn’t incur the higher Benefit-in-Kind company car tax loading a diesel unit receives in the UK and other countries.

During deceleration, the electric motors function as generators to charge the battery pack. The regenerative braking can be increased when the brake pedal is pressed.

The strength of regenerative braking is also adjustable using the selector which has three strength settings and the paddle selectors on the steering wheel offers five strength settings.  The battery pack can also be charged directly from the home/business mains 240-volt electricity supply.

A high speed charger can usually be supplied free by British Gas subject to a survey and the average price of a full charge would be around £1.50. The batteries can also be charged to 80% capacity in just 30 minutes by simply letting the petrol engine idle.

The charging process can also be remotely controlled, together with in-car pre-heat or pre-cool functions, through a free-to-download iOS or Android app.

At the media launch Lance Bradley, Mitsubishi’s UK managing director said they had planned to sell around 3,000 Outlander PHEVs in a full year but judging by the public interest so far it could be 10,000.

“The price, performance, technology, no driving range anxiety, low fuel use and tax savings make it such an attractive proposition for many people and everybody wins with this car,” he said.

He added that he expected two thirds of customers to be fleet and company car users because of the low tax implications but retail interest through their dealerships was also very high.  The most popular version initially is likely to be the top spec GX4hs.

The impressive figures continue with the fuel economy, officially 148mpg, with the EV and petrol hybrid system giving a range of 514 miles.

The CO2 emissions are only 44g/km, 32.5 miles can be covered using only the twin electric motor power, VED road tax is £0, London Congestion Charge is £0 and the most likely users – company car drivers – would pay only 5% Benefit-in-Kind tax. Residual value over the usual three years/30,000 miles is set at 49% and insurance group ratings are 24E to 27E.

Lance Bradley added, “148mpg is the official EU Combined Cycle figure but for real life shorter journeys with the electric power mode it will give more mpg and longer journeys less mpg as the petrol engine function is used more. What we don’t want is for our customers to be disappointed so our dealers are being trained to advise them of the facts that the published figures are the official ones but in reality real-life figures could be better or worse depending on the type of journey.”

In terms of tax savings for company car drivers the Outlander PHEV’s low 5% BIK tax means it will cost a 40% tax payer just £665 a year, less than most small cars.

Other important figures for the new Mitsubishi Outlander PHEV is the 3-year/unlimited mileage warranty for the vehicle itself with the electric/hybrid components having a 5-year/ 100,000 mile warranty.

As with all Mitsubishi models, the Outlander PHEV has a pan-European roadside assistance package valid for 3-years.

The top-of-the-range GX4hs additions include adaptive cruise control, forward collision mitigation system and lane departure warning. All versions have a Euro NCAP 5-star safety rating.  The vehicle even has an Acoustic Alert System which warns pedestrians of its presence when running in the silent EV mode.

If the ‘stats’ all look very impressive on paper then how does it all work in real-life?

One of the major things the Mitsubishi Outlander PHEV provides with its petrol/electric/hybrid vehicle is there is absolutely no driving range anxiety. With its pure EV range of 32.5 miles that exceeds the UK’s average daily commute distance of 25 miles.

But then the vehicle can charge the batteries anyway with the petrol engine just ticking over or being used in conjunction with the two electric motors.

In reality the range is limitless and further real-time driving range confidence is displayed to the driver via the e-Assist data display.

It’s not even difficult technology to use in real-life. Switch on, move the gear select lever to drive, press the accelerator and away you silently glide.

From then on the car chooses the most efficient mode to suit the driving conditions. But the driver can ‘play’ with the rate of battery regeneration during deceleration to optimise the harvesting of electric power to the battery pack and an added bonus is the stronger the harvesting force the less brake wear takes place.

The switch between modes is seamless, the petrol engine quiet and responsive and the outright acceleration performance exceeds that of the 2.2-litre turbodiesel Outlander models.   Combined power output is 186bhp with 140lb ft of torque from the engine and 245lb ft, combined torque from the two electric motors.

Top speed is 106mph, zero to 62mph takes 11 seconds but due to the high torque output from just over zero rpm from the electric motors it felt much faster and very responsive .

Real life fuel economy during the media test driving around Bath and the South Cotswolds was impossible to report an overall mpg figure as the test drive was divided into three sections.

Around the busy and hilly streets of bath 12 miles driving used no petrol at all and left 11 miles of battery still available.  On a 25mile route using a section of motorway driven at 70mph and country roads at 50mph the figure was 217mpg and finally a section of off-road tracks and a drive back to Bath the figure was 2,824mpg but this included a long downhill section where the electric motors provided most of the power.   All sections were driven at realistic and legal speeds.

What is clear, like all hybrids, is that they work best for commuter driving, lots of stop and starts to charge the batteries and to be able to use the EV mode.

On longer local trips on winding roads with lots of ups and downs they also work well, again because of the energy capture.

On motorways there is not the opportunity to ‘harvest’ electric power so often so a conventional diesel version offers better fuel economy in those situations.

Mitsubishi in fairness say that for journeys over 106-miles a 2.2-litre diesel Outlander might be more fuel efficient.  However the big gain the PHEV version offers is the low CO2 emissions which in turn save loads of money in tax. 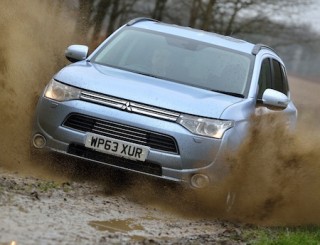 The Outlander PHEV retains its traditional 4WD capabilities.  The system allows the front wheels to be driven by one electric motor and or the petrol engine and the rear wheels by the second electric motor. There is no prop-shaft required running from the front to the rear resulting in less fuel consuming friction and drag.

Ride comfort is firm and impacts from potholes felt due to the heavier duty coil springs needed to compensate for the weight of the batteries. With the extra weight of the battery pack  positioned under the floor in the middle of the vehicle the Outlander PHEV feels more ‘planted’ on the road  with a good balance front to rear sharpening up cornering performance with reduced body roll.

Most other Outlander versions have seven seats but due to the space taken up by the rear motor the PHEV version has seating for five passengers plus a large 463-litre boot with all the rear seats in use and around  1,022 litres with the rear row folded down.  The Outlander PHEV has a braked towing capacity of 1,500kg which is 500kg less than the 2.2-litre turbodiesel models.

Mitsubishi claim the Outlander PHEV is a game-changer in the industry. The emission figures, fuel economy potential and aggressive pricing figures speak for themselves.

All these elements add up to make it a tempting buy for many people, especially company car users because of its lowest possible Benefit-in-Kind tax rate of 5%, but the fuel saving potential is there for all users.

For: A very impressive vehicle with huge potential for saving on fuel costs and tax, attractive pricing, seamless power delivery between petrol and electric modes, retains off road 4×4 capability and useful towing ability.

Against:  Firm ride, variable driving conditions and the length of journey will greatly affect the real-life fuel consumption more than with a conventional diesel powered 4×4.