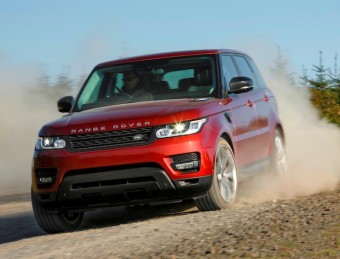 When the new Range Rover Sport goes on UK roads or off them in the next few weeks, the all-new five door models will weigh in at up to 420kg less than the outgoing versions.

This 33% weight saving is equivalent to five passengers and their luggage, although it still weighs nearly 2.2-tonnes. The new models use the same type of aluminium monocoque body construction and suspension components as the new Range Rover launched earlier this year. There is a 25% increase in body stiffness for improved torsional rigidity.

Despite its Range Rover family styling the previous Sport models used a body on steel chassis construction derived from that used by the Land Rover Discovery.

Not only does the weight saving improve fuel consumption and lower CO2 emissions by 15%, the new Range Rover Sport is more agile on and off road with much improved handling manners.

In other words, more interior space and comfort and better on-road driving dynamics without losing the off-road performance.  He added “We have responded to that and the new Sport is the fastest, most agile, most responsive Range Rover yet.”

All the power units have been revised to offer more power and torque yet with lower CO2 emissions and improved fuel economy.  The petrol engine comes from Ford’s Bridgend plant and the diesel’s from Ford’s Dagenham facility and the vehicles are built at the Land Rover Solihull facility.  All models have permanent four wheel drive, air suspension, a ZF eight speed automatic transmission and stop/start as standard. 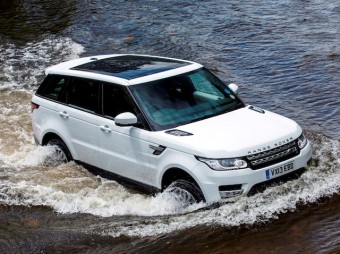 The Range Rover Sport is Land Rover’s most technology-packed vehicle to date including several brand new innovative features. For example, customers can specify the new Wade Sensing feature, monitoring depth when driving through water as the vehicle gains an extra 150mm in its wading capability to 850mm. The Park Assist function now includes new ‘Park Exit’ and ‘Perpendicular Park’ features. The vehicle offers state-of-the-art audio systems in three levels ranging up to the stunning 1700W Signature Reference system which has 23 speakers.

There is also a vast range of extras that can be added to the new Range Rover Sport including a 5+2 power operated occasional seating option, thanks to the 178mm long wheelbase, which enables customers from 169 worldwide markets to create their ultimate bespoke SUV.

To come early next year is a 4.4-litre SDV8 334hp turbodiesel and yet to be disclosed four cylinder engines, likely petrol and diesel, to be built in Jaguar Land Rover’s new Wolverhampton engine plant. A diesel hybrid version will join the line-up later next year.

In the UK 66% of UK Range Rover Sport sales go to retail customers and 95% of them choose the SDV6 292hp turbodiesel engine.

As a British brand the event was based in gentile Cheltenham before ‘scribes’ took to the roads through the Cotswolds, into the Welsh borders, across the narrow and mountainous tarmac and gravel tracks of the Brecon Beacons, including the military gunnery ranges, before returning via Land Rover’s famous Eastnor Castle estate 4×4 test facility. 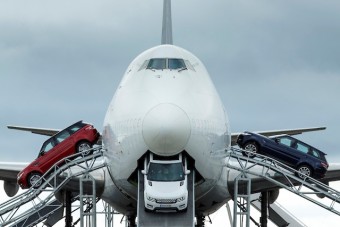 After that the programme included straight line acceleration and emergency braking tests at Cotswold Airport Kemble.  The finale was pure motoring theatre where the unique experience of driving the new models up and down very steep ramps in, out and through a decommissioned Boeing 747 aircraft (right) to showcase the Range Rover Sport’s agility and the ease of manoeuvring a vehicle 4,850mm long in confined spaces. A unique and not to be forgotten driving experience.

In the space I have to write this story it is impossible to cover all aspects of the new model. Try it and you will buy it, there is no better vehicle off-road.

On road the handling is sharp and well controlled but perhaps not so composed as the BMW X5/X6 SUVs which really are designed for fast road travel. The Range Rover Sport vastly outperforms the BMW models when it comes to driving away from roads and onto the rough stuff. 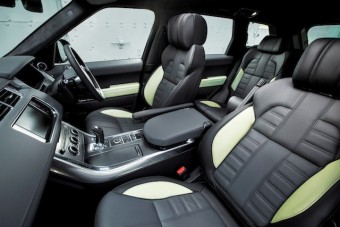 Briefly the aspects of the new Range Rover Sport that impressed me most were the roomy interior, but the third row seat option does away with the space for the spare wheel; the range of functions the driver can easily select to assist them; the quality of the interior; the new sharp  exterior styling; the agility of the vehicle and its nimbleness off road; the relative ease of threading a passage through trees and obstacles and going up or down the most outrageously steep and slippery inclines.

The outrageously fast 5.0-litre V8 supercharged  510hp, 461lb ft of torque petrol engine gives a zero to 60mph time of just 5.0 seconds and a top speed of 155mph but even more impressive, for some,  is the exhaust note from the Ford Bridgend built power unit.

Officially this unit will return 22.1mpg in the Combined Cycle, our test drive returned 20.2mpg for fast on road driving and 15.9mpg for acceleration testing and off-road driving.

With CO2 emissions of 298g/km road tax is the highest level at £1,065 for the First Year rate reducing to £490 for the second year onwards. Company car tax is the maximum 35%.

By far the best selling engine will be the 3.0-litre SDV6 turbodiesel with 292hp and 442lb ft of torque which covers zero to 60mph in just 6.8 seconds with a top speed of 138mph.

In the Combined Cycle this engine will officially return 37.7mpg and on or test returned 36.4mpg for on road driving and that reduced to 29.2mpg after some serious off road travel.

For: Utter brilliance off road, responsive, nimble, precise, loads of easy to use technology, powerful but fuel efficient engine, looks good inside and out, comfortable ride, classy image.

Against: High prices for high spec versions, auto gearlever fiddly to use, improved road handling but the supreme off road capabilities will always compromise on road high speed handling.