The comparative simplicity of electric cars is leading to a boom in their sales while conventional petrol and diesel models are stuck without adequate supply of semi-conductors for their technology.

Latest figures show over one-in-three new cars sold in Wales last month was electric or hybrid and it’s the only part of the UK to actually see all car sales rising. 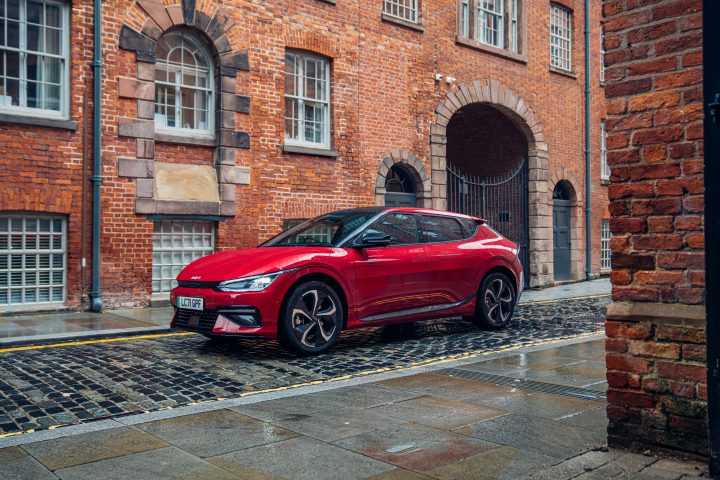 Kia became the best selling ev brand, helped by the arrival of its new large EV6 model on the tail of the e-Niro and Soul EV models which also made it the best-ever October for the Korean brand in Britain.

However, electric models have about a sixth of the components of a conventional petrol or diesel model and use far fewer chips so are easier to build, with some exceptions.

The issue means that October’s new car registrations look bad, although there is a glimmer of hope. 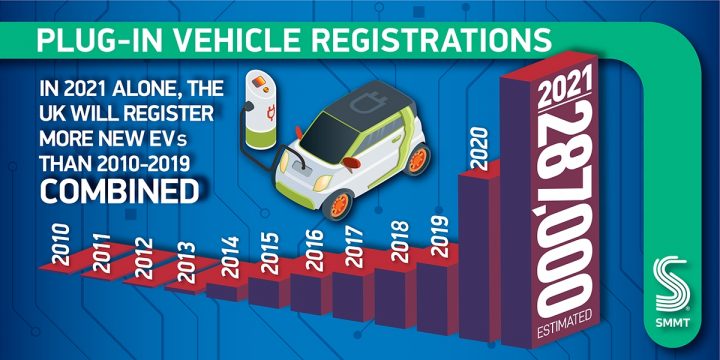 Plug-in vehicle sales have accelerated so rapidly that more will join Britain’s roads in 2021 than during the whole of the last decade, according to the latest forecast from SMMT.

SMMT expects Britain to break its plug-in records, forecasting that businesses and consumers will take up around 287,000 of the latest zero-emission capable cars during 2021 alone – around one in six new cars.

Based on current forecasts, BEV registrations are also expected to exceed those of diesel by the end of 2022. Sales for the whole year are expected to be about 1.66 M new cars, some 30% below the average over the last decade.

The rise is even more remarkable given that 2021 is expected to be a relatively weak year for new car registrations, some -30% below the average recorded over the past decade.1 The semiconductor shortage has reduced overall global car production, but manufacturers have done all they can to ensure the availability of as many plug-in vehicles as possible.

Uptake rates of plug-in vehicles began to accelerate dramatically during 2020, as the billions of pounds invested by manufacturers in new technology resulted in the widest ever choice of zero emission-capable cars. More than a quarter of all car models available in the UK can now be plugged in.

Businesses have been particularly incentivised to invest in plug-in cars thanks to a range of tax breaks and grants, meaning around two in every three new BEV registrations this year have been for large fleets.

It’s a different picture in various parts of the UK, as explained by Ben Nelmes, head of policy and research at New AutoMotive, “In some parts of the country, as many as 1 in three new cars are fully electric.

“As world leaders gather in Glasgow, these figures are a reminder of the great progress the UK is making towards clean transport. We hope that other countries follow the UK’s lead by setting ambitious dates by which they will end the sale of new polluting cars. October’s new car registration figures showed the diversity of the market for battery electric cars in the UK – with no brand securing more than 10% of the market for new EV sales. Parts of the country are racing ahead in the switch to electric cars. Nearly 1 in 4 new cars bought in Newcastle in October was fully electric. ”

Newcastle remained the city with the highest share of EV registrations, with 1 in 4 new cars being fully electric. Bristol and London are a close second. In some parts of the country – South West London and Oxfordshire – EVs make up 1 in three new cars sold.

DVLA figures gathered by New AutoMotive show Wales had 519 new electric cars registered last month, some 11% of the total while hybrids accounted for 24% with 1,128 cars sold. That means the combined percentages accounted for more than a third of all Welsh registrations in the month.

Three times as many electric and hybrid cars are registered in South-east Wales as in West Wales, reflecting the more rural and reduced charging network out of urban areas.

Wales is bucking the trend and growing new car sales.

In Wales, 3,946 new cars were registered last month an improvement of 7.32% over the same last year.

It has also cut back on the losses throughout 2021 and reduced the downturn to minus 2.69% with registrations in ten months now standing at 49,253 new models.

Volkswagen dominated UK sales in October and scooped 8.52% of sales, with Polo taking top spot for the first time in recent years.

BMW, Kia, Mercedes-Benz and Audi all out performed the rest and left Ford and Vauxhall, traditional leaders, trailing behind.

New car registrations have fallen for the fourth consecutive month, with a decline of -24.6% to 106,265 units compared to October last year, according to the Society of Motor Manufacturers and Traders.

Plug-in vehicle uptake remained positive in the month before COP26, with battery electric vehicles (BEVs) equalling their September market share of 15.2% with 16,155 units, while plug-in hybrid vehicles (PHEVs) grew to 7.9% or 8,382 units.

“Electrified vehicles, however, continue to buck the trend, with almost one in six new cars registered this year capable of zero-emission motoring, growth that is fundamental to the UK’s ability to hit its net zero targets.

“With next year looking brighter, and even more new models expected, the continuation of this transition will depend on the preservation of incentives that overcome the affordability barrier, and the ability of the public and private sectors to increase public on street charging to allay EV driver concerns.”