In truth, there can be few similarities betweenCafé & Bar Hat Castle Combe motor racing circuit and the awe-inspiring Sistine Chapel at the Vatican in Rome, except perhaps one extremely tenuous link.

The ceilings of both these very different establishments have been frescoed by famous artists, albeit 500 years apart and using very different genre and styles.

The lesser known of these two illustrators, Jim Bamber, was a talented artist and cartoonist specialising in motorsport and best known for caricatures incorporating distinctive racing driver designs. Jim’s cartoons adorned the pages of Autosport magazine as well as an annual compilation of funny drawings taken from this magazine called The Pits.

Born in Lancashire 1948, Bamber studied at Preston’s Harris College of Art before moving to London to pursue a career as an artist, where he worked for some well-known publications and would soon be freelancing for Carmagazine, leading to a spell at the publisher of the renown annual international motorsport review, Autocourse.

It was during his time as an illustrator, when studying a picture of rally champion Stig Blomqvist dressed in racing overalls and helmet, that Bamber began to practice drawing cartoons of drivers in race-suits and full-face helmet. But instead of drawing faces, he simply drew a ball as a helmet – with eyes – and added names above their visors. Bamber would continue to draw drivers’ caricatures, while working as an illustrator and later as Art Editor for the Rallycourse yearbooks.

Bamber took his first commission, entitled “Yumping Yarns”, in 1983 while working as cartoonist for the monthly magazineCar & Car Conversions, to which he contributed material on World Championship Rallying. This was followed by a stint for Autosport with a cartoon known as “Bamber’s View”, specialising mostly in Formula One’s current affairs. Although appearing regularly in the popular weekly magazine, this cartoon became a regular feature in 1994. In addition, he also created a short-lived comic strip in Auto Expressweekly magazine 1991/1992 called “Bumpa the Bear”. By 1988, Bamber’s driver caricatures had evolved from lanky goggle-eyed characters to dumpier versions, a design he used for the rest of his career.

Stirling Moss was the only driver to be given his own distinctive helmeted design in 1998, differing from Bamber’s standard full face helmet style incorporating the distinctive Moss pudding-basin helmet with goggles and powder blue overalls, synonymous with Moss’s professional career.

That particular Bamber cartoon incorporates a Damon Hill fan being asked a question by a F1 journalist: “Who’s the greatest driver?”, while being threatened at gunpoint from behind by a Michael Schumacher caricature, who in turn is threatened at gunpoint from behind by a Moss caricature who says: “Moss – pass it on!”. Bamber claimed the cartoon wasn’t as funny with just Schumacher, so he included Moss, and it increased the humor value.

Other top-line F1 personalities given their own caricatures included Bernie Ecclestone, incorporating his familiar suit and sunglasses, often displaying $ symbols on the lenses and the late Max Mosley. Then there were F1 team managers including Jean Todt, Frank Williams, and Ron Dennis. Drivers too sans helmets, such as Mika Häkkinen and Michael Schumacher as well as international sports celebrities including Posh & Becks in 2007.

As well as pictorial art and cartoons, Bamber also designed limited edition motor racing models in his own unique style, as well as the winged-lady statuettes that were presented to winners at the annual BRDC-Autosport Awards ceremony. This particular trophy is designed to be grasped, with one hand around the legs/torso region, allowing the trophy to be held aloft in celebration and triumph akin to motor racing podium presentations. Sadly, Jim Bamber died of cancer on 20 June 2014 at the age of just 65 but his unique style and great legacy of drawings, models and cartoons lives on.

Back to Castle Combe where the impressive 32’ X 2’ cartoon mural was commissioned by the late circuit owner Howard Strawford in 1994 and painted on the west side of the main ceiling-divide in what was then known as The Tavern. This is the circuit restaurant and bar, created from one of the original RAF MESS buildings and progressively modified, with a newly profiled roof added around 1993.

Bamber was given a flexible remit to use his customary wit and ingenuity but asked to include various key racing drivers and personalities who had been involved or featured during the circuit’s history up to that point and these personalities are identified in JB’s customary style with Christian or nicknames on helmet fronts.

Capturing the alchemy of life at Castle Combe circuit in a series of humorous scenes featuring caricatured racing drivers and cars, the mural shows L-R: Saloon cars being checked by perplexed scrutineers with the circuit’s distinctive Race Control building and Avon Bridge in the background while another group of drivers including Damon Hill, Ayrton Senna, Nigel Mansell, Barrie ‘Whizzo’ Williams and Bristol racer Roger Orgee, pose for a group photo. Close-by is a Podium presentation featuring perennial FF champion Bob Higgins followed by a Group C car and a group of drivers taking instruction at the racing school. 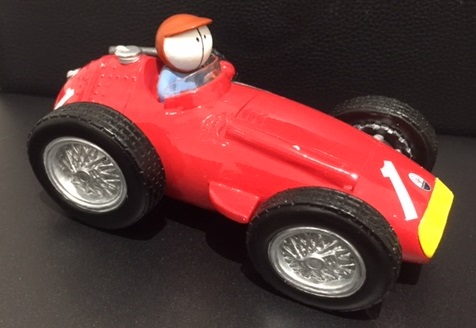 The centerpiece of the collage is a sign saying ‘Welcome to Castle Combe, Britain’s friendliest Racing Circuit’ in dereference to the circuit’s long-held sobriquet. Behind this sign are Gerry Marshall, Ron Fry, Alo Lawler, Roger Orgee and Vince Woodman. The far right shows a Racing School Kart, TVR Tuscan, and wayward group of FFs, one being stretchered away by two jovial first aiders. But the fresco includes various subtle sub-stories and readers are encouraged to look carefully to avoid missing Jim’s clever pictorial humour.

Sally Bamber, Jim’s widow recalled, “I remember Jim was chuffed to be asked to do the wall cartoons. I found an old diary for that year, and it took him two very long days to do it on 8th & 9th February 1994 and he was pleased with the end result, but I’ve no idea what he was paid I’m afraid, or anything else about it!”

It is now 28 years since JB painted his Castle Combe mural and in common with the works of some of his contemporary wall art illustrators – including the redoubtable Banksy – Bamber’s distinctive Wiltshire frieze miraculously survives in good condition.

For sure, it’s uniqueness and idiosyncratic British humour makes this irreplaceable piece of wall art worthy of a visit to Castle Combe circuit in its own right. We all dream of finding some hidden work of art, so the next time you’re enjoying coffee at Castle Combe’s Café & Bar H, simply look up and I guarantee you won’t be disappointed!