New Zealand will make an exciting return to an enlarged FIA World Rally Championship in 2022 after the sport’s first hybrid-era calendar was unveiled.

The country’s flowing North Island gravel roads near Auckland will feature for the first time since 2009 as the WRC celebrates its 50th season. The Land of the Long White Cloud’s 32nd WRC appearance, round 11 of the year, will take place on 29 September – 2 October.

Croatia’s asphalt is retained in an expanded 13-round schedule after the central European country hosted a widely-praised debut in April.

With Kenya’s iconic Safari Rally and Japan also listed, the season covers four continents – Europe, Africa, Asia and Australasia – as the pandemic eases and commercial rights owner WRC Promoter rebuilds towards its target of a 50-50 split between European and long-haul rounds.

Next year brings some of the biggest and most far-reaching changes in the sport’s history as the WRC enters a more sustainable age. Exciting top-tier hybrid Rally1 cars will blend 100kW electric motors and the existing combustion engine, while a hydrocarbon-based fossil-free fuel will be 100 percent sustainable.

The calendar was approved at the FIA’s World Motor Sport Council in Paris and WRC Promoter managing director Jona Siebel said the mix of classic fixtures and newer events would provide a mouth-watering schedule in a landmark season. It stretches over four continents with 13 rounds.

“Next year will be a momentous and thrilling one for the FIA World Rally Championship as we welcome the new hybrid era Rally1 cars, part of a portfolio of regulations to drive the series towards a greener and more sustainable future,” he added.

“Next year also marks the WRC’s 50th season and we have a calendar to match. We’re delighted to welcome back New Zealand, a rally which first appeared in 1977. Its gravel roads are a drivers’ delight and although our plans to return in 2020 were unfortunately derailed by Covid-19, it’s fantastic we can now push through with those.

“The pandemic sadly brought the globe to its knees but as the world recovers so, too, does the WRC. We previously outlined our strategy for an equal spread of rallies between Europe and long-haul destinations and the 2022 calendar is a significant step towards that goal.” 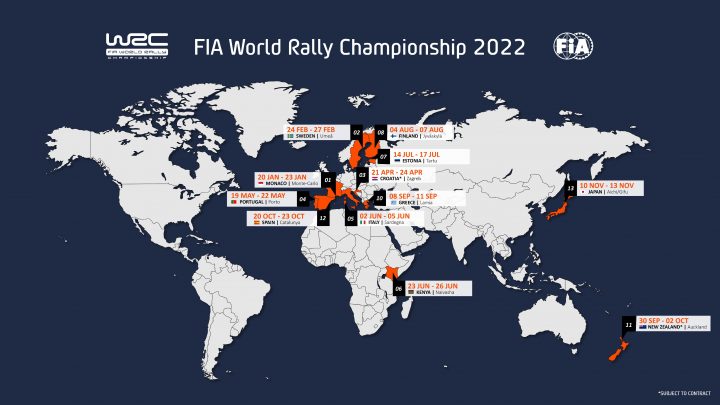