You are here: Home / First Drives / Honda Civic Tourer rises to challenge with space to spare 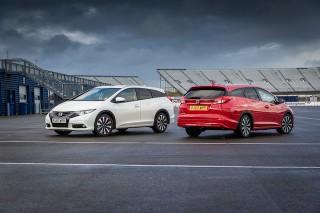 The Honda Civic Tourer this month joins the company’s best selling UK model range, with a lot of spare capacity.

Built alongside the current Civic, CRV cross-over and compact Jazz in Swindon, the new Civic Tourer has a loadspace which rises from 624 litres to 1,688 litres but a body which is only 23cms longer than the hatchback version and has a lower loading lip than the hatchback.

Honda’s designers and its UK engineering and manufacturing centres have worked hard to create as much space as possible and included a very big under-floor compartment to boost it overall by keeping the fuel tank under the front seats.

The result is a roomy five-seater with very good normal bootspace and quickly extending capacity, and which has a sweeping and smooth silhouette, but also makes it one of the most commodious cars in its class.

It will be initially available with a choice of the new Swindon-built 120PS 1.6 diesel engine with sub-100gkms emissions and manual transmission, or 142PS 1.8 petrol unit emitting 149gkms with manual or automatic transmission and four trim levels, S, SE, SR and EX.

Depending on trim level, drivers will get the latest Adaptive Damper System to improve ride and handling under varying loads.

Another first is the availability of the Driver Assistance Safety Package wrapping up radar and camera systems to keep the car within lanes and speed limits as well as alerting to blind spots and stationary traffic ahead.

Its available from SE trim upwards for £780 or you can go for the Safety Pack Two and get cruise control and automatic emergency braking for £2,500.

The new Honda Civic Tourer is a very worthy addition to the range, building on the Hatchback’s refinement and room but extending the package and giving it a better profile and practicality in my mind.

The low loading boot floor hides a big recess beneath and the offset split in the Magic Seats as Honda describe them means you can gradually raise total capacity to almost 1,700 litres but have a completely flat floor for ease of use. That’s a lot of space, or air depending on your viewpoint.

I tested both 1.6 diesel and 1.8 petrol and preferred the former for its greater flexibility and pulling power, particularly if laden. Both are quiet units and we averaged 54mpg for the diesel and 43mpg in the petrol. 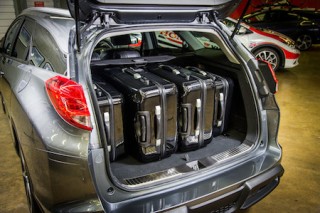 The new Adaptive Damper System really comes into its own in the Tourer, providing selectable settings to compensate for carrying weight and driver style as well as road surface quality.

Toggling between the dynamic, normal and comfort settings produced instant changes in feel and responses and is a very desirable feature to specify.

Personally I liked the styling inside and out, the refinement is very good and it is a roomy interior with lots of family-friendly features and it’s a well priced rival to competitors – and it’s built in Britain.