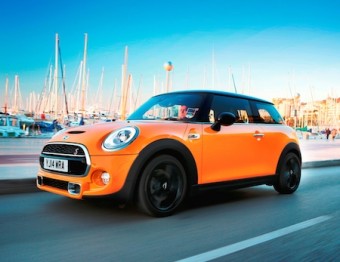 MINI has turned another corner with the arrival of the all-new Hatchback version.

The latest Paceman and Countryman shown at international motor shows this year are really based on the previous platform but now the Mini Hatchback is truly new and sitting on a platform which will be rolled out under future derivatives.

Mini was launched in 2001 and refreshed five years later but in March we saw this latest Hatchback made in Oxford join the booming and popular range.

All other versions of the MINI line-up such as the Clubman, Convertible, Coupe and Roadster will in due course be built on the new platform with the new generation of Euro 6 engines as and when the time comes for them to be replaced, anywhere within the next three years.

In the UK and globally the Hatch version take 50% of all new MINI sales with the five door Countryman Crossover with 2WD and 4WD versions being the next most popular taking a third of all MINI sales here and globally.

Almost 52,000 new MINIs were sold in the UK last year, a marginal increase over 2012. Sales for the first quarter of this year are down by 18% over the same period last year due to customers waiting for the New MINI Hatch to arrive.

The all-new larger MINI Hatch is completely new from the ground up and not only offers slightly more interior space but have improvements in terms of technology, engine efficiency, power delivery, driving refinement and dynamics, acoustic refinement, a noticeably higher quality interior and the revised range of the popular personalisation options. 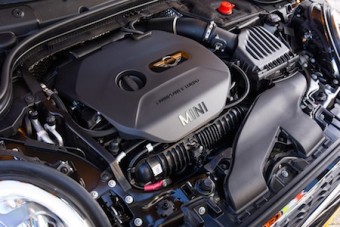 The new MINI has a revised suspension system, struts and the front, multi-link at the rear. The components are lighter but torsionally stiffer to retain the famous go-kart handling characteristic.

To bring more refinement to the MINI work has also been done to eliminate vibrations entering the car through the suspension system with chassis development done on UK roads. If these changes work on our poor roads they will work anywhere.

My first UK sampling of the all-new MINI was with the current top of the range Cooper S priced at £18,650. But the price doesn’t end there as MINI owners always go for options including the popular Pepper and Chili packs and my test car had numerous additions to showcase what is on offer.

The final price fully loaded was £25,350, still not too expensive for a car of this quality, even a small one and is not out of place compared to a ‘fully-kitted’ Audi A1, Citroen DS3 or a VW Polo GTi.

Inside the evolution of MINI continues but it is much plusher, it’s like getting into a smaller version of a top-spec BMW so it feels much more grown-up. There is definitely more interior space and the rear is less cramped for legroom but it is still not the place for adult passengers.

The boot is a little larger than before and now has a useful height adjustable floor. The ‘signature’ large round dial in the centre of the dashboard, which previously housed the speedo, is now used for the navigation, entertainment and communication systems and the speedo has been moved to a conventional position above the steering column.

The electrically operated window switches have also been moved to a more logical position on the doors.  There are still too many small switches and controls spread around the dashboard, centre console and the roof panel between the sun visors. It all looks very ‘busy’.  Just like a BMW there is an i-control unit and buttons positioned between the front seat squabs, not in the driver’s line-of-site, which control the various on-board information systems.

Being the Cooper S version the standard specification is very comprehensive as it needs to be for the price and items range from the start/stop button, to air conditioning, on-board computer, DAB radio, sports front seats, 60/40 split fold down rear seats, Bluetooth and much more.   The navigation system comes as one of several upgrades provided in the Media Pack XL for an extra £1,175.

Power output is 192hp but it’s the generous amount of torque, 280Nm delivered from only 1,250rpm, which impresses most. The engine appears quieter and more refined; it is certainly more flexible at low speeds and really responsive mid-range.

Another impressive characteristic given the performance on offer is the fuel economy.  Officially the Combined Cycle figure is 49.6mpg and on during my test driving week covering all types of roads, speeds and traffic conditions the average figure was an impressive 36.2mpg.

This was not close to the official figure but given the performance of the engine I was more than happy with it.  The revised engine and new slick action six-speed gearbox worked very well together. 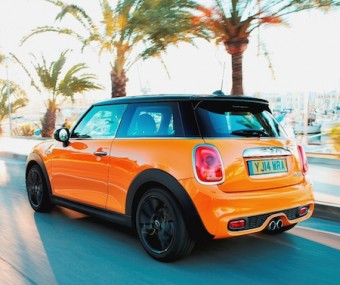 The MINI has always been renowned for its go-kart handing. The new Hatch does that in part. The steering is sharp enough to make it feel sporty, as does the engine performance but perhaps not as much as before.

The car feels heavier and not as agile as before and I found the fun-to-drive element to be less obvious.

It is certainly more refined, the ride has been improved and although still firm the revised suspension copes better with our roads and no longer jumps about over bumps and potholes.

It feels a more grown up product and less youthful.

Perhaps that mirrors the profile of long-term MINI customers.

Against: Perhaps too grown up for the young at heart, less agile, feels heavier and to some extent less fun to drive than past MINIs.