Matthew Hirst has won the 2022 Motorsport UK Pirelli Ravenol Welsh Rally Championship title with a perfect 150 points score after winning the penultimate round of the series, the Wyedean Stages Rally last Saturday.

It’s the second time that Hirst and co-driver Declan Dear have been Welsh champions, having won the title in 2019.

Driving his Pirelli-shod Delta Salvage Ford Fiesta R5+, Hirst scored maximum points on the opening four rounds of the series – the WKD Trained Dogs Rally North Wales in March, April’s Rallynuts Stages Rally, the Plains Rally in mid-May and the Nicky Grist Stages at the start of July – leaving the Doncaster driver only needing one more good result to secure the title.

And he did that in style in the Forest of Dean – leading the 40-stage mile Wyedean Stages from start to finish and winning by a very impressive 47 seconds.

“This season couldn’t have gone better really, with five maximum scores from five events,” said Hirst (below). “Coming into the Wyedean it felt that I had a lot to lose and not much to win, and to win the Welsh Rally Championship again is a great feeling.” 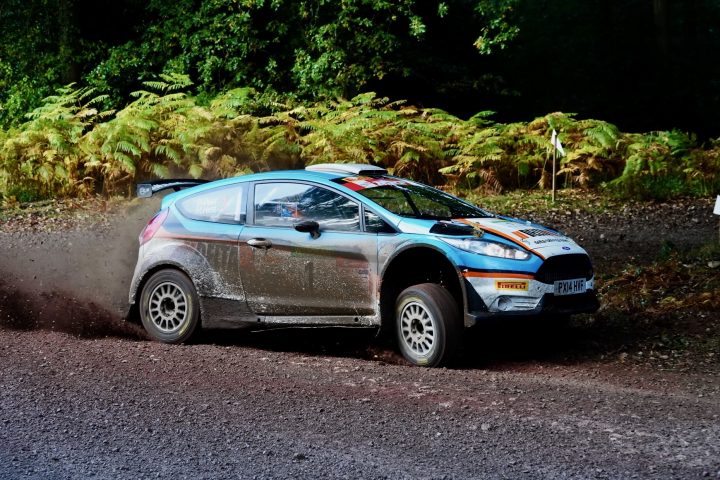 It was far from easy, as heavy showers of rain and fallen leaves made the forest roads extremely slippery – and even Hirst wasn’t immune to a few problems, overshooting a couple of junctions on the opening loop of three stages and getting tangled up with a barrel that had been positioned to prevent a corner being cut on SS6.

Then, 19-year-old Robert Wilson scored this first overall forest rally stage win and his first ever overall podium on his way to a stunning second place in his Ravenol Mitsubishi Evo 7.

Co-driven this time by Martin Haggett, the Herefordshire teenager survived a few overshoots and an off on SS5 which saw the car come to rest on a tree stump, but the great result jumps him to fifth in the overall drivers’ standings.

Wilson has also closed the gap in the race for the OnThePaceNote.co.uk supported Welsh Junior title, having scored four maximums from his four appearances.

It was a magnificent performance by both crews, which sees Caine move from fifth to third in the overall Pirelli Ravenol Welsh drivers’ points table and extend his lead in class W13, while Sankey secures the class co-driver’s title.

The seventh and final round of the 2022 Motorsport UK Pirelli Ravenol Welsh Rally Championship is the Visit Conwy Cambrian Rally on Saturday 29 October.