You are here: Home / Features / Engineering / Government “misguided” by science of assisted driving

The Government is being “misguided” by science according to road safety experts concerned at the planned permission of assisted driving on motorways.

Responding to the UK Government’s announcement yesterday around paving the way for Automated Driving, Thatcham Research and the Association of British Insurers (ABI) are urging caution.

“There is still a lot of work needed though by both legislators and the automotive industry before any vehicle can be classed as automated and allowed safely on to the UK roads,” comments Matthew Avery, director of research at Thatcham Research, who said the proposed systems would not recognise a pedestrian and avoid them (above).

“Automated Lane Keeping Systems (ALKS) as currently proposed by the Government are not automated. They are assisted driving systems as they rely on the driver to take back control.

“Aside from the lack of technical capabilities, by calling ALKS automated our concern also is that the UK Government is contributing to the confusion and frequent misuse of assisted driving systems that have unfortunately already led to many tragic deaths.

“A widespread and effective ongoing communications campaign led by the automotive industry and supported by insurers and safety organisations is essential if we are going to address current and future misconceptions and misuse.”

Thatcham Research and the ABI believe there are four non-negotiable criteria that need to be met before ALKS can be classified as automated:

“We have engaged closely with the UK Government around their Call for Evidence on ALKS,” continues Matthew Avery, “and look forward to ensuring that future technologies such as ALKS can be adopted safely to reduce road casualties.”

“While the insurance industry fully supports the development towards more automated vehicles, drivers must not be given unrealistic expectations about a system’s capability. It is vital that Automated Lane Keeping Systems (ALKS), which rely on the driver to take back control, are not classed as automated, but as assisted systems. By keeping this distinction clear we can help ensure that the rules around ALKS are appropriate and put driver and passenger safety first.

“Thatcham Research has identified some concerning scenarios where ALKS may not operate safely without the driver intervening. These need to be addressed in the consultation.”

Thatcham said they had identified 12 requirements for safe driving but so far only two were met by the proposition. “Its not mature and cannot be relied upon to keep a driver safe,” they added. 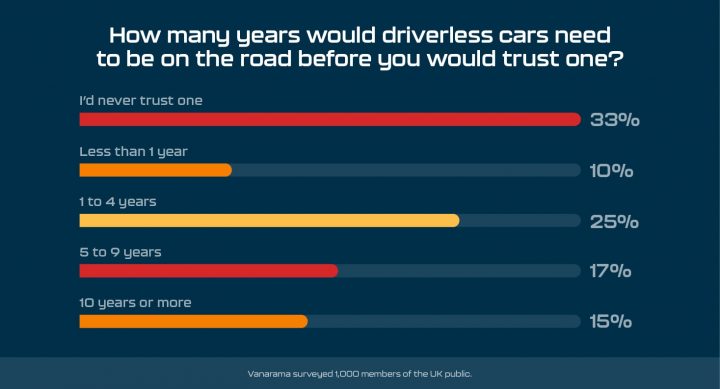 The march towards a driverless future continues. In 2020 the British government launched a consultation that could lead to driverless cars being legal on UK roads as early as late 2021.They are also considering proposals to allow these driverless systems to operate on roads with speeds of up to 70mph.

It was also recently reported that Apple is planning to release a driverless car in 2024 ‘with next-level battery technology’, showing that in the next 5 years or so, this space will see a large influx of companies starting to enter the market. The question is, with self-driving technology being such a drastic change from how we operate cars today, is the public ready to trust driverless cars?

Vanarama surveyed 1,000 members of the UK public to find out.