You are here: Home / First Drives / Ford Focus ST rises to the Goodwood challenge and the UK market 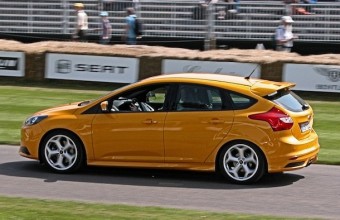 The new high performance 2.0-litre Focus ST had its UK debut at the Goodwood Festival of Speed Moving Motor Show this week.

Available with two body styles, five door hatchbacks and estates, ST prices start at £21,995 and rise to £26,595 with three levels of specification ST-1, ST-2 and ST-3. The 154mph new ST made its UK debut in action on the famous 1.16 mile hill climb course in the hands of a few selected UK motoring journalists.

With only early production STs available unfortunately this didn’t allow for test driving on public roads so we were limited to short runs up the famous hill climb course.

The Focus ST is the first ‘global’ performance car from Ford and it will be sold in 40 countries. The UK will be the single largest global market for sales taking half of the 9,000 annual production available and deliveries start in September to coincide with its starring role in the movie adaption of ‘The Sweeney’, the famous television series which featured Ford’s Granada, Capri and Cortina models.

Steve Humbles, product manager for Ford of Britain, said the heritage of the ST brand can be traced back 50 years to the Lotus Cortina of 1963 and had expected the new ST five door hatchback to account for 90 per of UK sales but early indications are that the estate version will achieve more than the 10 per cent sales forecast.

Humbles added that the ST-2 is expected to be the most popular version taking 60 per cent of sales followed by the ST-3 which should appeal to 30-per cent of UK buyers.

This new engine gives 10 per cent more power with CO2 emissions and fuel consumption 20 per cent lower than the previous five-pot unit.

For the hard-line petrol-heads Ford had no good news. Humbles said, “In our One Ford policy of global models categorically there are no plans for a Focus RS, this isn’t coming –fact.”

But if the size of the Focus ST doesn’t fit the bill for some people then a Fiesta ST with a 1.6-litre 180PS (177bhp) Ecoboost petrol engine will be introduced during the second quarter of 2013.

Prices start at a very competitive £21,995 for the five door hatchback, there’s no three door version, and £23,095 for the estate.

All models have a six-speed manual gearbox with drive to the front wheels through a new torque steer compensation function, torque vectoring control with an improved dynamic cornering control and electronic stability system.

Outside the ST has the usual muscular sports style bumpers, bulging side skirts, racy signature trapezoidal grille and rear roof spoiler. There is a centre exit tailpipe said to be designed to look like Darth Vader’s Advanced Fighter in the Star Wars films.

Away from flights-of-fancy the exhaust system does have a sound symposer that gives an exhaust tone similar to the previous ST five pot models.

The new ST looks good but I didn’t see it being as impactful with the petrol-head punters at Goodwood as the last Focus RS was two years ago.

The standard Ford Focus is already one of the sharpest handling cars in its segment, as good as the Golf, better than the Astra and it is already the most comfortable with handling and larger wheel options not having the overly firm and unsettled ride characteristics suffered by the others.

The ST specification doesn’t alter the class-leading agility although the ride is firm but not uncomfortable. The new sharp reacting steering rack just needs 1.8 turns for lock-to-lock change of direction and the new anti torque-steer measures still retain enough feedback to remind the driver there is 247bhp under the bonnet. Acceleration grip, cornering turn-in, balance, poise and engine response all impressed.
A fairly sedate couple of runs up the Goodwood hill, thanks to slower cars so BMW M5 and Skoda Citigo, now known as Citislow, gave ‘journos’ a brief but impressive introduction to the most powerful Focus ST yet.

It’s certainly the best Focus ST yet and in these financially difficult times much more affordable than its GTi class competitors. Roll on the arrival of right hand drive versions when we will get to grips with the new Focus ST on our challenging UK winding roads, Citislows permitting of course.

For: Best Ford Focus ST yet in terms of price, performance, fun and ability.

Against: Not a Focus RS in terms of striking visual impact.