You are here: Home / News / Food for thought and the breathalyser

We all know that some foods contain alcohol, and traditional dishes are often the worst offenders.

Sometimes the alcohol is obvious, like in tiramisu, while in other dishes the alcoholic origins are a little more subtle.

Because of this, urban myths spread about booze-infused dishes and how you can be over the limit from eating too much Christmas pudding or Baileys cheesecake. So, in the hope of debunking these myths, Car Lease Special Offers looked at the recipes and tested them out to see how much you would really have to eat before being over the drink-drive limit.

Good news – it’s quite a lot. If you’re trying this at home, however, make sure the cook knows what they’re doing and hasn’t doubled – or tripled – up on the doses! 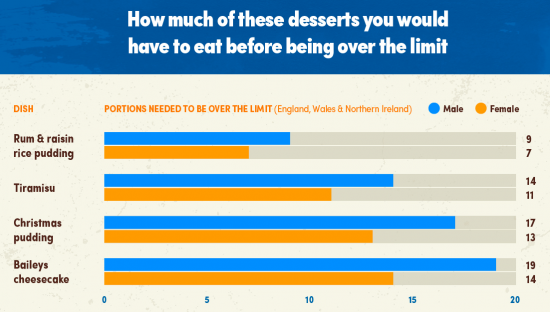 Even the most potent on our list, a rum & raisin rice pudding made with more than half a cup of rum, would take nearly two kilos’ worth to put you on the wrong side of a breathalyser test. Or one and a half in Scotland, where the rules are stricter.

Despite its alcoholic title and 400ml of brown ale, the steak & ale pie comes in at the other end of the spectrum, taking a mind-bending 170 portions.