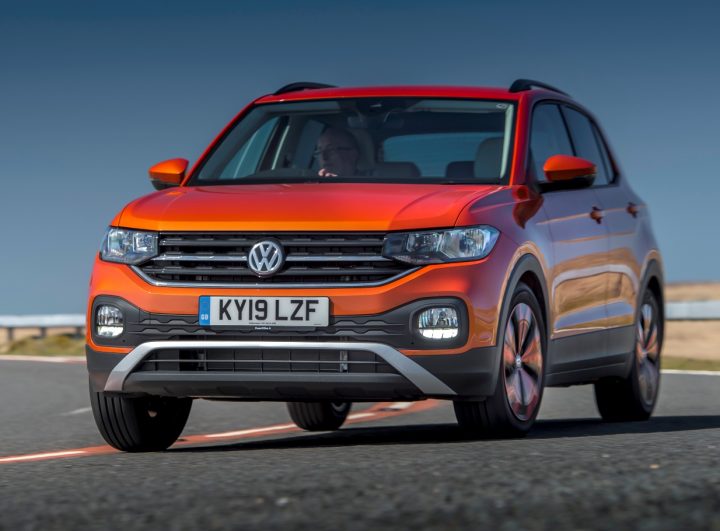 With SUV styled vehicles now taking close to, or in some countries, over 40% of the new car market, manufacturers from budget to luxury brands have wasted no time in covering all angles in terms of size, performance and price, writes David Miles.

Another new SUV range is now joining the fray, the Volkswagen T-Cross, an urban SUV which sits below in size and price their popular T-Roc which in turn sits below the Tiguan, Tiguan Allspace and Touareg SUVs in the brand’s comprehensive SUV line-up.

Put simply the T-Cross is a SUV version of VW’s Polo supermini sized hatchback and is launched with the marketing strapline ‘I am more’. It’s a couple of inches longer than a Polo and just less than six inches taller but feels roomier inside and both the T-Cross and Polo have the same wheelbase length.

The T-Cross for UK versions have as standard a sliding bench seat which expands the modest 385-litre boot to 455-litres without needing to fold down the rear seat backs with up to 1,281-litres if the rear seat backs are lowered.  With the bench seat in its most rearward position rear legroom is increased by 150mm but slide the seat fully forward and the legroom disappears almost completely. Headroom is ample throughout and the elevated seating positions give good visibility for all passengers.

So that’s the T-Cross package, it’s a tall muscular SUV styled  version of the Polo and prices start from £16,995 and go up to £25,055 and of course there is the choice of numerous extra cost options. The cheapest Polo with a less powerful petrol engine can be purchased for a shade over £14k.  Both the T-Cross and Polo have five door hatchback body configurations.

The T-Cross might look like an SUV but all versions are only front wheel drive. At launch there is the choice of two engines, both 1.0-litre-3-cylinder TSI turbo petrol units with 95 or 115hp power outputs. A diesel engine option is under consideration and might join the range later and electric power could also become a choice further down the line. 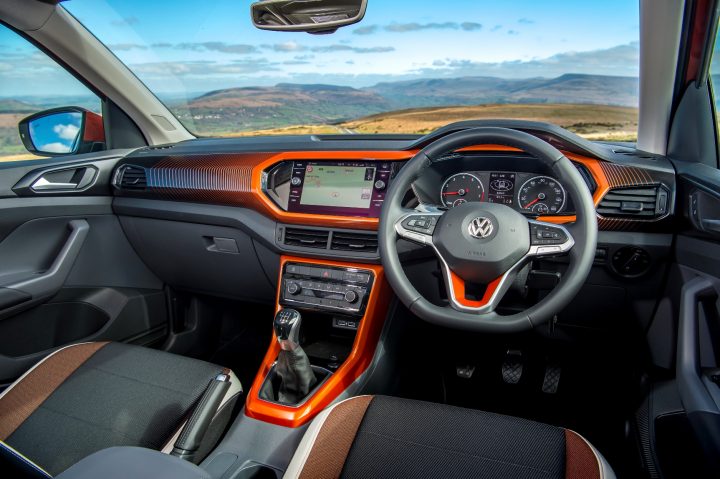 The lower power petrol unit provides 175Nm of torque, the other one 200Nm and both deliver this torque from 2,000rpm. The 95hp unit comes with a 5-speed manual gearbox and CO2 emissions of 112g/km, the 115hp unit offers the choice of either a 6-speed manual or 7-speed automatic transmission with CO2 figures, depending on the specification of 112/115g/km for manual gearbox models and 111/112 for the autos depending on the spec level. 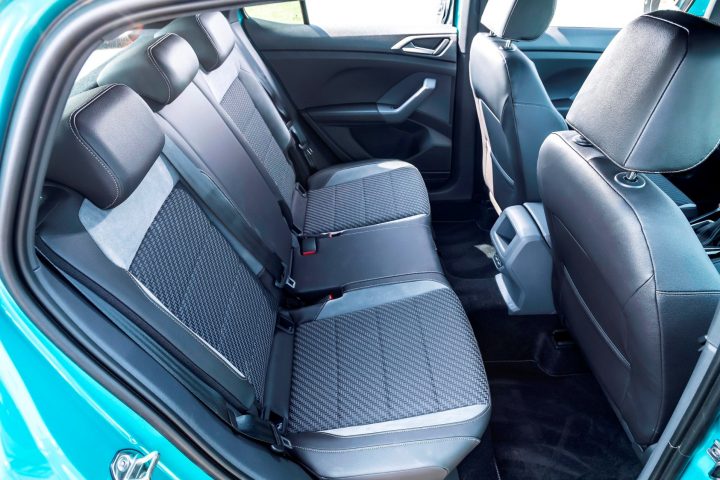 The interior is to be complemented more for its space, equipment and infotainment features more than its quality. There is a lack of soft-touch trim with more hard plastic moulded panels than ideal painting a picture of ‘built to a price’. However on a more positive note the T-Cross handles well, it’s neat and nimble in traffic and copes well with winding country roads despite its high-riding tall suspension. It’s very intuitive to drive, easy to park with good visibility, very much following the performance and capabilities of the Polo five door hatchbacks.

As for the choice of engines?  The 1.0-litre 3-cylinder 95hp TSI unit is mated only with a 5-speed manual gearbox and having driven this version around the winding Berkshire country roads it coped well enough without much sparkle and it lacked engine response below the 2,000rpm level. Top seed is 112mph, 0-62mph takes 11.5-seconds. I would suggest this is the model to go for if urban travel is going to be the main type of journeys covered by owners and potentially as a second car in the family. The Combined Cycle fuel economy figure for this engine is 48.6mpg with CO2 emissions of 112g/km. On our test drive this engine returned a real-life figure of just 40.3mpg reflecting its lack of a sixth gear and just having to work that bit harder on hilly winding roads. The First Year VED road tax cost is £170 and then the Standard rate for year two onwards annual cost of £145. Company car drivers will pay 26% Benefit-in-Kind tax. The price of this SE 95hp manual model is £18,805.

For those T-Cross owners wanting to use their vehicle for a wider variety of driving conditions including long motorway journeys, the 115hp unit with a bit more torque and more importantly mated with a 6-speed gearbox, or the choice of a 7-speed automatic transmission, will find this unit more responsive with a slightly better turn of speed and better real-life fuel economy and more in the way of tax costs. 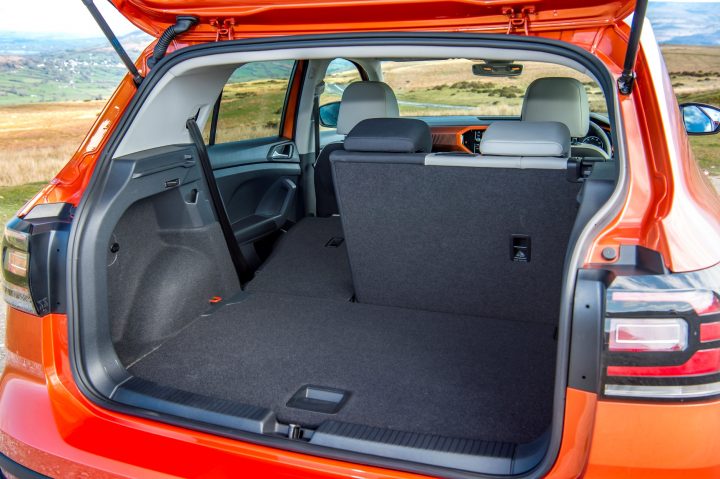 Cruising along open roads, having the sixth gear ratio, reduced engine noise intrusion creating a more refined drive. It has broader appeal in my opinion coping really well with in-town traffic and well able to pick up the pace for open road and long distance travel duties. Top seed is 120mph and 0-62mph takes 10.2-seconds.

This 1.0-litre TSI 115hp petrol unit with a manual gearbox has Combined Cycle figures of 48.3mpg. The auto model’s figures range from 44.8 to 45.6mpg.During my test driving on a similar Berkshire rural route the real life figure for the manual gearbox model was an impressive 49mpg.  The price of this SE 115hp manual model is £19,555.

As for CO2 figure this manual model is 112g/km, the auto 111/112g/km. The First year VED costs all fall into the same band of £170 First Year rate and then £145 Standard rate. Company car tax rates are 26/27% depending on spec wheel size. Insurance group ratings are 8E for the SE 95hp version and 10E for the best selling SE 115hp model. All versions are covered by Volkswagen Group’s ungenerous 3-years/60,000-mile warranty. 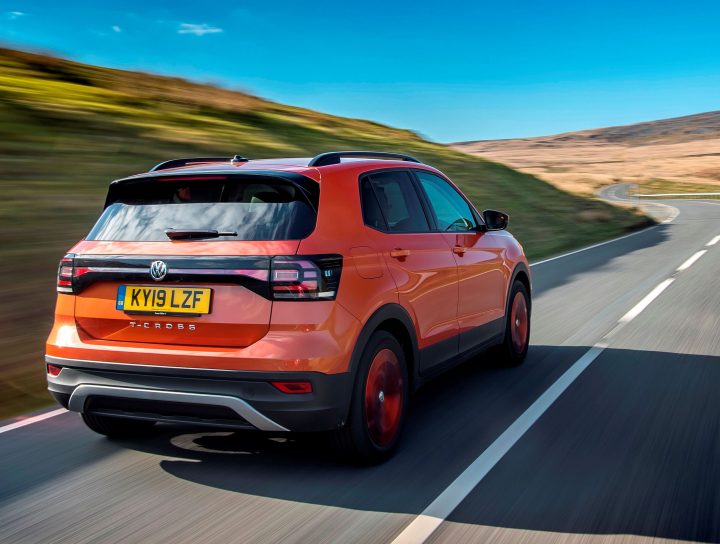 The ‘I am more’ marketing strapline might be just about correct for the new VW T-Cross.  In an over-populated SUV, but still growing, market being small doesn’t mean in this case being skimpy on spec or bland for kerb appeal. VW might just find their popular Polo hatchback’s strongest sales contender is their own new T-Cross urban SUV.