You are here: Home / Roadtests / Dacia Stepway is a move in the right direction 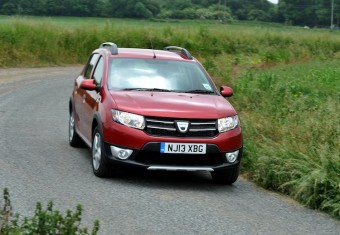 One of the success stories of the year has been the launch of Dacia into the UK market.

In January we saw the first Sandero hatchbacks and Duster SUV and now they are joined by the 2WD Sandero Stepway crossover.

It looks similar to the stablemate Duster which is sold with 2WD or 4WD, but the Stepway has only front wheel drive and is to all intents and purposes a beefed up Sandero hatchback.

Later this year the fourth model in the range, the Logan estate, will hit showrooms and become the cheapest in its class at under £7,000 entry price.

The Sandero Stepway is also pushing the bounds of credibility with this Romanian-made four-model range costing between £7,995 and £10,800 for its choice of Ambiance and Laureate trimmed 900cc 3cyl 90bhp petrol or 90bhp 1.5 4cyl diesel engined versions.

That’s a simpler range than the Sandero Hatchback, which is only marginally cheaper, but in some respects you also get much more useful equipment with the Stepway.

Only manual five-speed transmission is fitted and the power steering, disc/drum brakes and coil spring suspension is carried over from the Sandero too, but beefed up and raised to improve ground clearance. Inside the five-door body are five seats and a luggage area which extends from 320 to 1200 litres with a low loading floor.

It is easy to access, quite roomy and seats are fairly comfortable with some useful oddments spaces around. Visibility is good. 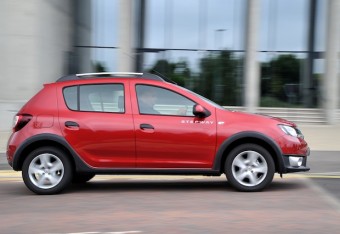 Dacia is sold by all Renault UK’s 140 dealers and while it has been the fastest growing brand they have also struggled to meet demand for a new model with 3yrs/ 60,000 miles warranty for the price of a good used car.  Dacia seems to have hit the UK market at the right time and the models tick the boxes for many buyers seeking value and straightforward engineering with few frills.

There is no doubt the Sandero Stepway will be a success as well among those who do not expect cutting edge technology or sharp bills.

Dacia UK communications director Jeremy Townsend said they had enjoyed a very good launch with the range. “We have sold 6,000 of the two launch models so far this year and Dacia is the fastest growing brand in the country,” he said, adding that it was nearly all retail business.  “The arrival of Sandero Stepway will bring new opportunities for us to build on the success we have enjoyed so far this year.” 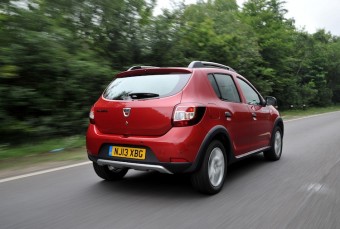 The easy to access cabin immediately strikes anyone climbing into the Stepway after leaving a conventional hatchback.

It is roomy with good seats although not brilliant adjustment of them and you can easily see around you.

The steering column adjusts for height but not reach and I would have been happier if I could raise the driving seat for personal preference.

Minor controls and instruments are basic but clear, the heating and ventilation straightforward and effective with power windows throughout the range but rear powered glass only on the upper models, as are electric mirrors and air conditioning.

We tested the 1.5 90bhp diesel and thought the turning circle was too wide for confined maneuvering and you had to do a lot of arm twirling in a car park. On the road it did not vibrate or twitch and the ride was comfortable and brakes good but there was nowhere to rest your left foot between gearchanges.

Press on and the Sandero Stepway easily keeps up with traffic with a top speed just over 100mph and takes about 11.5 secs to reach 60mph. We returned an indicated 63mpg over country roads without any dual carriageway or motorway to use.

The gearbox is very direct but particularly noisy when moving through the selected ratios and this also highlighted the suspension noises which came into the cabin from underneath.

If you can live with these few shortcomings and uniformly dull interior design which is after all a matter of opinion and taste, you will get a very reasonably priced crossover with lots of room and low running costs.