You are here: Home / First Drives / Cosmetic and practical changes to Mazda6 for 2015

Mazda’s solid innings in the UK car sales league continues with another 6.

This is not a completely new model but a facelifted version of the saloon and tourer which brought them about 8,000 UK sales last year and is expected deliver the same in 2015.

Mazda has created new front end styling and fitted light emitting diodes on top versions while the rear gets new styling treatment and between the ends the wheels have been upgraded and given a high-lustre finish.

The styling changes are more significant inside with revisions taken from the latest Mazda3 so the central console is new and more driver-friendly and it gets an electric parking switch for the first time on the Mazda6. Top models come with head-up display infront of the driver and upgraded navigation system.

There are revised suspension settings and more sound insulation in all versions to reduce noises but the powertrains continue as before.

The familiar five trim levels continue as SE, SE Nav, SE-L, SE-L Nav and Sport Nav over 28 versions of saloon and semi-estate styles, with diesel or petrol engines in various outputs matched to either six-speed manual or automatic transmission and priced from £19,795 to £28,795. 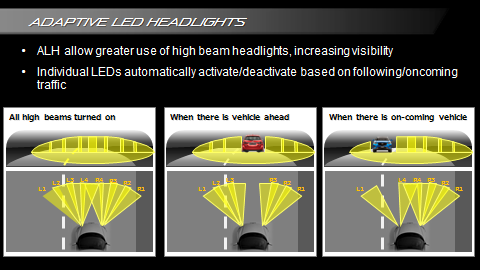 Mazda UK public relations director Graeme Fudge said the objective of the revisions was to build on the Mazda6 reputation of giving value for money and would also enhance refinement through greater safety and equipment.

He said about 80% of Mazda6 registrations in UK will be the diesels and 80% will be saloon style with some 65% of them acquired through leasing plans as buyers’ habits are changing and they want a fixed monthly cost rather than outright purchase. Top sellers will be the near top grade SE-L Nav with 150ps diesel engine taking some 25% of registrations.

“Fleet sales increased by 33 per cent in 2014, with Mazda becoming a more appealing choice for many company car drivers.”

The Mazda6 became the dominant retail player in its segment, accounting for one-in-five sales, outperforming the Ford Mondeo. “When we launched the original Mazda6 in 2002, it was priced £1,000 below the Ford Mondeo,” said Allibon.

Mazda6 has always been something of an under-estimated medium-sized car that really can cut it against more familiar rivals.

The changes help to bring it more up to date and make it more competitive than before in terms of looks, and particularly safety, and the better selling top models get most attention and revision this time.

Mazda say they have reduced road noise by up to 25%, but on the big-wheeled 150ps Sport Nav tourer we tested it was still annoyingly high and contrasted with the SE-L Nav saloon sitting on smaller 17-inch tyres, although ride was biased towards firmness with both.

Powertrains favour the diesel for get up and go but on our short and mostly urban test routes we were surprised with the petrol 2.0 model’s good 41mpg compared to the modest 43mpg from the diesel. 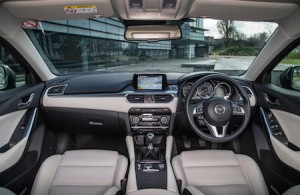 Inside the saloon and tourer cars are very roomy, even in the rear, and have good luggage space once you negotiate the small opening to the saloon boot.

We liked the new centre console design and layout of controls including the sensible placing of the rotary knob but the satnav display could be larger given this is a redesign.

The facelift will help Mazda6 satisfy existing owners but more comprehensive changes will be needed to make significant conquest sales and raise its game.