We all expect supercars to go fast, very fast, but the best also go very well when going slowly, as we discovered with the Ferrari F8 Spider,writes Robin Roberts.

Evolved from the 488 series, it blends the performance of the more track focused Pista with the practicality of the GTB and creates a very useable supercar with its own personality. 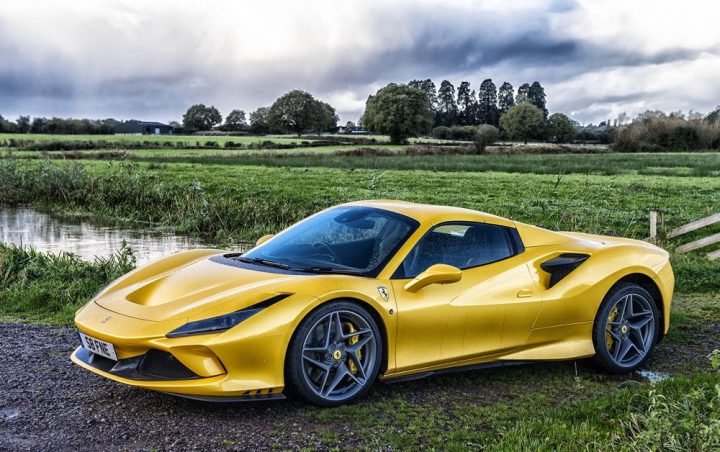 Add the versatility of a folding metal roof which operates in 14 seconds and you have a car that comfortably copes with the worst and wonderful best of British weather.

The engine is the familiar 3.9 litre V8 which can trace its origins to previous mid-engined cars from the Ferrari stable but updated and given more pulling and absolute power thanks to careful re-engineering and use of lightweight internal components, better induction and software retuning. 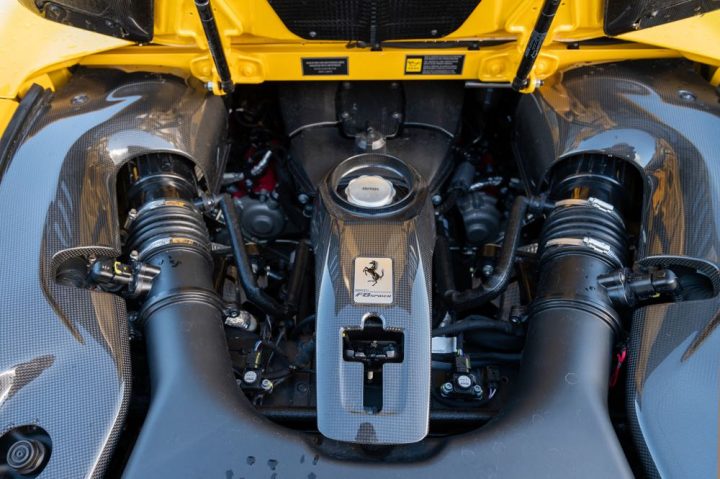 Aerodynamics have been refined by Ferrari’s own in-house design team and the air flows over and into the engine and brakes to provide greater cooling.

The result is the most powerful engine Ferrari has put into the chassis and then added the F8 prefix as a nod to its successive wins in engineering awards which created the Tributo hardtop coupe before the Spider. 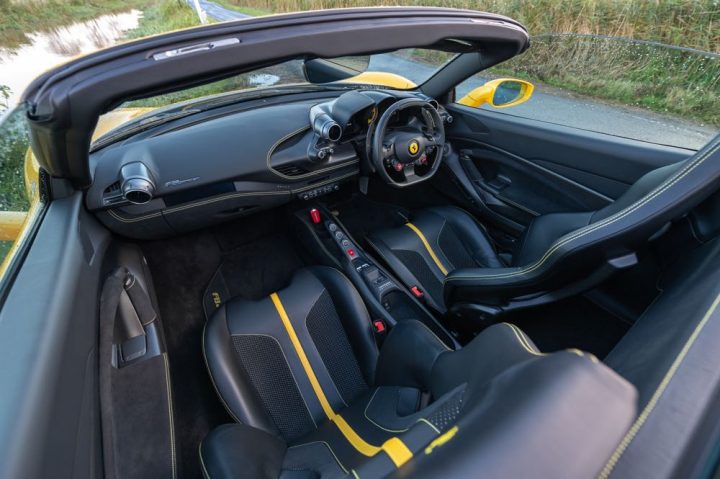 Now fitted with a typically rapid folding metal roof which slips into a compartment ahead of the rear engine it still provides an open air driving experience like few other cars. The airflow does an excellent job in forcing rain away from the driver and passenger unless going slowly and you have the additional refinement of a powered back window which can be deployed in part or fully to ventilate the interior when the roof is closed.

Powered side windows and a really good heating and ventilation system further give a wide choice of options to the driver and passenger.

The heart of the F8 Spider is that wonderful gutsy engine which crackles into life through the ignition button on the steering wheel and then roars as you move off by engaging a paddle on the column. 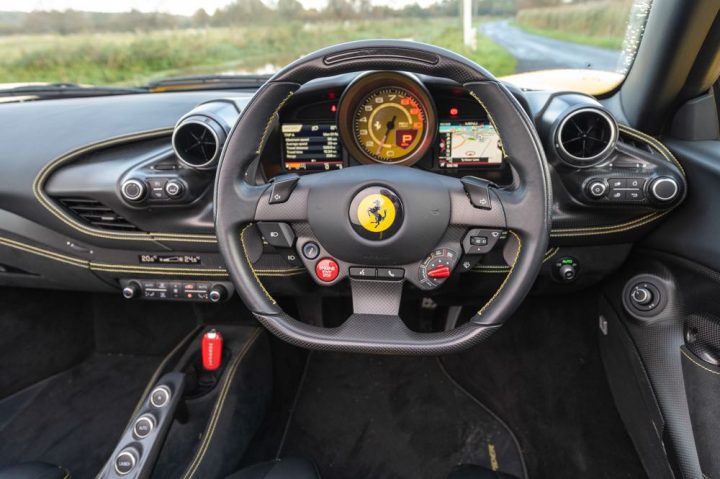 Console buttons determine drive, reverse, park and the seven-speed dual clutch gearbox is truly seamless, rapid and refined even when the driver decides to play at being a sports racing car driver with the up and down paddles just inches from fingers behind the small steering wheel.

It’s a busy wheel and also houses the indicators, which are fine in a straight line but which can end up 180-deg on the wrong side if you need to enter and leave a roundabout for instance. The wheel also houses the chassis and powertrain settings rotary control for normal to track-testing handling modes and in a first for me the F8 also came with a second instrument panel for the passenger to view. 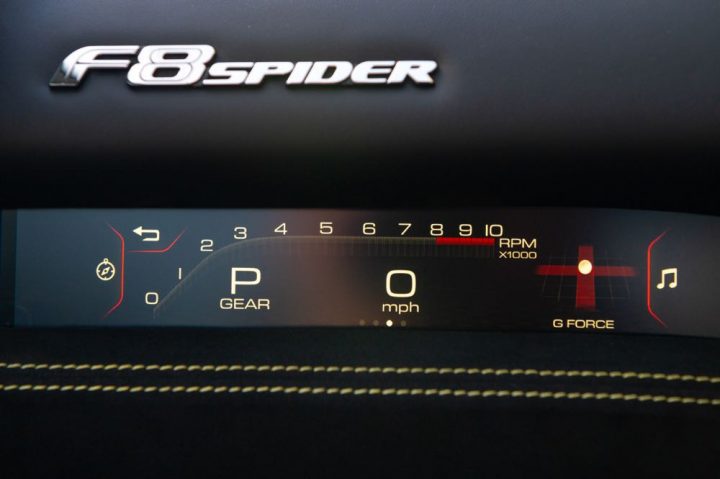 Its immediate and impressive when you switch through the settings and even has a winter-roads refinement. Suspension can be normal or set for bumpy roads as well so you are not going to be shaken too much with the big wheels and tyres transferring power and poise to the tarmac.

With over 700ps punching out the twin-turbo petrol engine accelerates the F8 Spider with bullet like response while the seven speed box simply flicks each gear aside as the horizon shoots ever closer.

Its dramatic but not dangerous with massive disc brakes underfoot and a steering system which is also developed from racing sports cars to be ultra precise and enables the car to be pointed through bends with confidence while the chassis ensures it grips without letting go and does not have any vices. 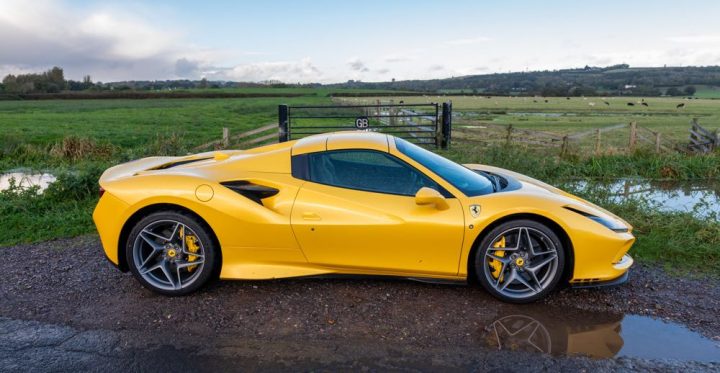 Switch off the chassis control and you’re a brave driver but it still keeps a little eye out and will reduce progress if it looks like things are getting a bit too marginal.

Inside the driver and passenger have a surprisingly comfortable cabin for their enjoyment. Easy to enter, not quite so easy to egress, the seats are low slung but tremendously supporting under the legs, about the buttock and torso with a small adjustment range. There’s not a lot of oddments space to the sides or rear and I think most coats and bags would end up in the 200 litres front boot.

The instruments infront of the driver are dominated by the tachometer with smaller displays for speed, fuel and fluid levels, as well as navigation and some may be surprised that greater prominence is not given to them or that the satnav is not better than it appears. 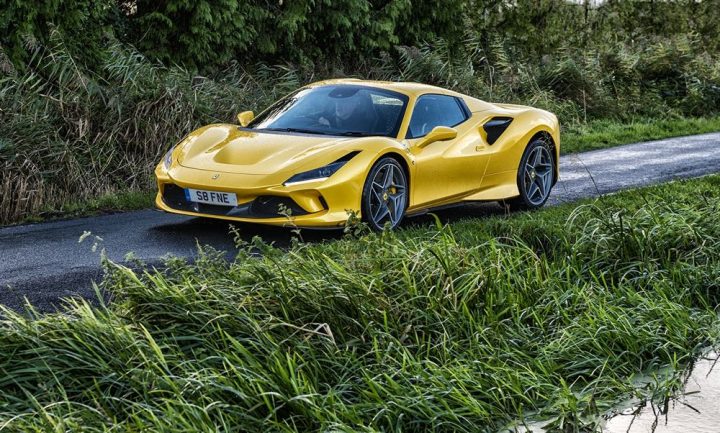 Visibility is great to front and sides, much more restricted over the shoulder when joining traffic from a slip road or turning and reversing but the very bright headlights and rapid wash/ wiper system were appreciated in poor visibility.

Noise levels are mostly related to that wonderful engine and its many sounds when idling, gently or seriously accelerating and particularly changing gears with its engineered blipping. There is some road noise, not a great deal and very little wind noise.

It’s a joy to drive over winding moorland roads with good sight-lines and between the walls of stone bridges or through long tunnels.

It also seemed to be a permanent magnet for every hot hatch on the highway, some even taking photographs as they shot past at 60mph plus. Yes, 60mph because the pleasure of this Ferrari F8 Spider can be enjoyed under the national limit on main roads as well as at higher speed. 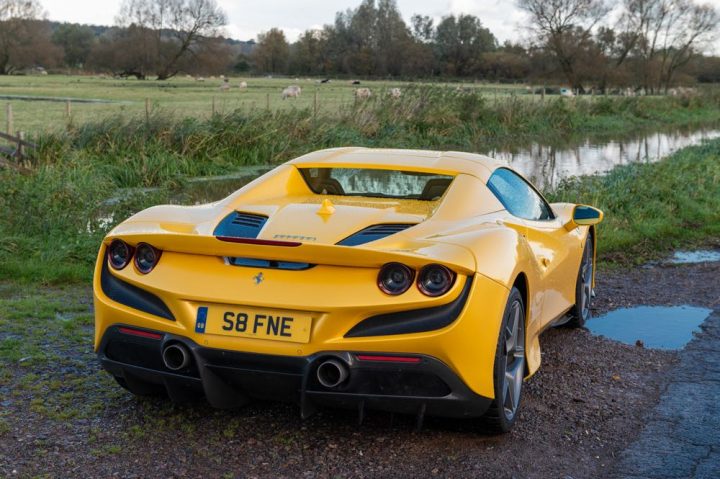 The car’s versatility was very satisfying and you end up wanting every journey to go on as long as possible.