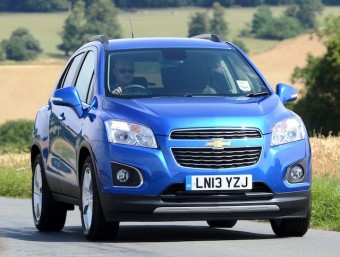 New models keep being added to the now trendy, must-have, ‘supermini’ SUV or Crossover segment of the new car market.

The latest arrival is the Chevrolet Trax five-door range with two and four wheel drive, petrol and diesel models from £15,495 to £20,495.

Although it wasn’t the first compact SUV, the Japanese did them decades ago mainly for their congested home market, the Nissan Juke seems to have ignited this new market sector. Compact crossovers have caught the imagination of European customers either wanting to own an SUV style vehicle for perhaps the first time or down-sizers from larger and more costly to run SUVs.

This year we have already seen the arrival of the Peugeot 2008, the Renault Captur, Vauxhall Mokka, the slightly larger but much cheaper Dacia Duster and of course there are established Suzuki 4×4 models as well. In addition there are the more car-like crossovers such as the Skoda Yeti, Mini All4s, Fiat Panda 4×4/Trekking and the new Fiat 500L Trekking.  Similar SUV styled small crossovers/SUVs will soon be here from the likes of Ford and Volkswagen.

UK sales of dual purpose vehicles (SUVs/4x4s) as the SMMT calls them rose by 21% last year to 201,102 units  and that figure didn’t include many ‘crossovers’ which their manufacturer’s consider to be cars rather than SUVs.  In July this year Nissan sold nearly 3,000 Jukes in the UK, which were just one month’s sales and not a prime selling period either with the new registration month of September coming up.

Chevrolet has no such high sales plans as they expect to sell around 3,500 Trax in the UK in a full year as supply is constrained.  It comes of the same South Korean production lines as the very similar Vauxhall/Opel Mokka compact SUV and global demand is strong for both Trax and Mokka.

He added, as a predominately retail brand in the UK with 65% of sales going to private customers we think customers will fall into two main categories. Young couples and families attracted to the fashionable but practical and cost efficient chunky SUV styling  and at the other end of the scale we expect to see customers down-sizing from larger more costly SUVs and of course there will be older empty-nesters who know what they like and like what they see with the Trax.

He said that at the moment they could only estimate the sales split between two and four wheel drive versions of the Trax. He expects between 15 and 20% of UK buyers to order a 4WD version but this will also depend on the availability from the factory. 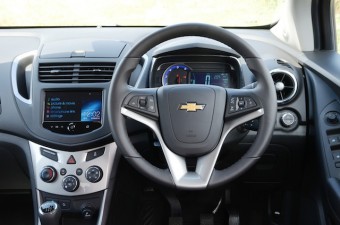 Like the Vauxhall Mokka there are three engines on offer, 1.4 turbo and 1.6 normally aspirated petrol units plus the 1.7-litre VCDi turbodiesel.  Cheetham says the 1.6-litre petrol engine will be the most popular because it is the least costly to buy.

The diesel is expected to be the second best selling engine because of the better fuel economy and lower taxing CO2 emissions which will appeal to business users as well as retail customers.
The higher performing and more modern 1.4T turbo petrol unit is likely to be more of a niche offering. Both the 1.4T petrol and 1.7 VCDi diesel  engines are available with 2WD or 4WD options, the 1.6 petrol is 2WD only and the 1.7-litre diesel has an automatic transmission option but only in 2WD form.  There are two levels of specification, LS but this lowest level is only available with the 1.6 petrol engine, and the well equipped LT which is available with all three engine options and expected to be the choice of 80% of UK Trax buyers.

Talking about Chevrolet’s fortunes in the UK overall, Cheetham said, Chevrolet is GM’s ‘foundation brand’ although of course it owns the Vauxhall/Opel brands as well. Predominately in the UK, the third largest market for the brand in Europe after Germany and France, Chevrolet appeals to retail customers with currently 75 dealerships, many small family businesses, who offer a loyal and no nonsense approach to dealing with buyers – they like to keep things simple and everything about buying transaction is transparent.

Chevrolet UK still expects to sell in the region of 14,000 new cars this year making it profitable for the first time in three years.   Last year they showed a 7.6% growth selling 13,476 new cars in the UK but with a significant proportion going to fleet and daily rental customers.

This year registrations to date show a 22.7% fall due to the shortage in supply of new models but also unprofitable fleet/daily rental activities have been reduced. While their 2013 fleet sales are down, their retail sales are up, so with the arrival now of new models such as the Trax there is the potential to move back into profitability.

Unfortunately at the UK media press launch for the five door Trax compact SUV, Chevrolet didn’t have the 1.6-litre, 114bhp petrol engine, expected to be the best-seller, available due to the late arrival from the South Korean factory. So I opted for the next best engine, potentially the one that makes most sense for medium to high mileage drivers, the 1.7-litre VCDi 128bhp turbodiesel with 2WD and a 6-speed manual gearbox.

Officially this unit will return 62.7mpg in the Combined Cycle and my test drive, covering busy A/B roads around The Chilterns, returned an impressive 61.6mpg.  With CO2 emissions of 120g/km VED road tax is £0 First Year rate and then £30 per annum year two onwards.   Insurance is group 15E. The test car had the best selling LT specification and costs £18,945, about mid-way for pricing in the new range.

The Chevrolet Trax uses the same underpinnings, engines/transmissions as the Vauxhall/Opel Mokka as they all come off the same South Korean production line. All the visible body panels for the Trax are different but it still retains that chunky compact SUV styling with its distinctive Chevy family nose.  Inside the Trax is different from the Mokka as well, although both are roomy and will easily seat four adults and perhaps two adults and three children. The boot isn’t that ample at 356-litres but fold down the rear seats and that goes up to 785-litres, still not great but after all it is a 4,248mm long supermini segment hatchback, albeit an elevated one.  The braked towing weight is a maximum of 1,200kg so there is enough potential for family recreational use such as boat or caravan towing.

The best selling LT specification is conventional in most ways with the usual air con, electric windows and door mirrors, cruise control, folding rear seats, daytime running lights, Stop/Start function, remote central locking and so on.  Most noticeable as being different is the digital speedo and a touchscreen display which is used to control the radio, phone settings and computer. It can also be used, linked by MyLink infotainment to a smartphone, to play music, make calls and navigate via a sat/nav app.  It’s a bit fiddly and not easy to use when driving without taking your eyes off the road.  The plastic trim looks durable and family- proof but feels hard and budget priced.  The LT spec seats are upholstered in a combination of nylon type fabric and something looking like leather but probably isn’t but it should be durable. 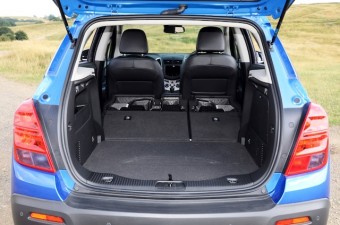 As for driveability? The Vauxhall Mokka came in for some initial criticism when it was first tried by the UK motoring media prior to its launch. Changes to the suspension and steering were made to suit UK roads. The same changes apply to the Trax. However like the Mokka things are still not good enough. The ride can be firm, unsettled and crashy over country roads and cornering doesn’t induce too much confidence at higher speeds.  The 2WD model seemed better controlled than the 4WD version so I have to assume the all-wheel drive versions have beefed up suspension to cope with some off-road travel.

In truth most 4WD versions will come into their own during Winter with ice, snow, muddy and flooded road conditions when speeds are not so high. The 18-inch alloy wheels used for the LT version, although they are part of the chunky SUV image, do nothing to help ride comfort and most likely the 16-inch ones used for the LS would provide a more compliant ride.  No version has a spare wheel or even offers one as an extra cost option although there is space for one beneath the load area floor – bad news I think.

The 1.7-litre turbodiesel engine is a bit of a ‘growler’, quite noisy and harsh especially under load but to its credit it feels strong and responsive with 221lb ft of torque for good low and mid range performance in addition to the really good fuel economy.

This engine is known to be vociferous but most customers will live with it knowing it is providing good fuel economy with minimum tax costs.  Top speed is 116mph and zero to 62mph takes 9.6 seconds but it was my test drive fuel economy of 61.6mpg that impressed me most, that and the chunky exterior styling and roomy interior for passengers. 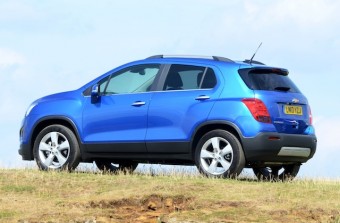 Against: Driving refinement and handling dynamics are not as good as some other new compact crossovers, no spare wheel even as an optional extra.