You are here: Home / Industry / Components / CES puts the brakes on autonomous vehicles

Electric vehicles, leaps in sensor technology, car connectivity and in-cabin gaming will head the automotive-related news coming out of the sprawling CES in Las Vegas opening today and running until Sunday.

Stellantis, which has trailed most rivals in the electric vehicle transition, will unveil its Ram 1500 Revolution battery-electric vehicle concept. Ram needs the pickup to stay competitive with the Ford F-150 Lightning — already on the market — and the Chevrolet Silverado EV, which goes into production this year.

Also at CES, BMW will showcase its Neue Klasse next-generation platform, which it expects to build vehicles upon starting in 2025.

After a six year break, Volkswagen Group of North America has returned to the event. It will showcase its first fully electric sedan (below) based on the modular electric drive matrix (MEB) and clad in smart camouflage, which uses unique technology and multi-layered paintwork to create light effects on parts of the vehicle, which is about Passat size. 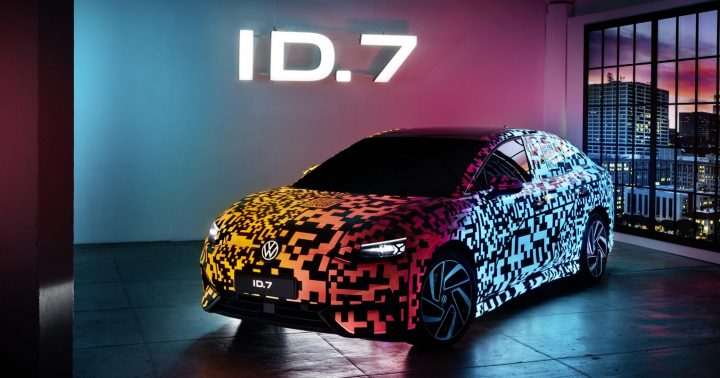 The Ram 1500 Revolution illustrates how the electric vehicle market is transforming. A decade ago, it was a niche business dominated by Tesla and augmented by small-volume compact models such as the Nissan Leaf and the Chevrolet Volt plug-in hybrid. But now EVs have spread to giant vehicle categories including pickups.

Ford says it plans to produce about 150,000 electric pickups this year and that it is working on the next-generation model. Ram has not discussed pricing or production goals.

While many of the first EV pickup buyers are consumers looking for the latest and greatest from automakers, analysts see commercial users as core buyers. Commercial vehicles typically drive repeatable routes well within the range of EVs and return to a central depot where they can be easily charged.

One hitch is pricing. Some of the initial consumer versions of electric pickups, such as the GMC Hummer EV, have price tags that approach or top six figures. Ford has increased the price of the Lightning three times since the truck’s launch, with the entry-level model rising to nearly $58,000 now, including shipping, from $40,000 initially.

The CES event as attracted about 250 automotive manufacturers and technology suppliers as it has largely replaced the traditional US car shows.

It puts the emphasis on the technology going into cars, notably this year highlighting electric models over autonomous driving versions which have been pushed aside due to issues with systems and potential massive civil claims for damages from errors in design or delivery.