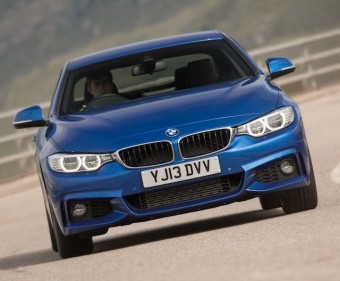 The new BMW  4 Series Coupe makes its World premiere at the Frankfurt motor show in September before going on sale in the UK in October, but for us motoring journos its UK debut was on the near deserted and challenging roads in the north of Scotland.

Although the new 4 Series two door Coupe is the replacement for the 3 Series Coupe, the newcomer is based on the recently introduced 3 Series Saloon and Touring estate but uses a slightly wider version of the same lightweight aluminium platform.  A 4 Series Convertible will join the line-up next year.

The BMW 3 Series is the UK’s best selling premium brand range of cars finishing in 7th position in the top ten sales chart last year with 44,521 registrations so deleting the Coupe from the successful 3 Series labelling is a brave move.  The  new 3 Series continues with is four door Saloon, five door Touring Estate and the recently launched five door GT line-up.

Matt Collins BMW’s UK Product Manager for medium, sized cars pointed out at the media launch that the 3 Series Coupe through three generations has had a strong following in the UK.   The UK takes 14% of global sales making it the largest market in Europe.  Globally the UK in terms of sales is second only to the USA who takes 33% of production and ahead of its BMW’s home of German market which accounts for just 10% of global sales.

Collins said he expects the new roomier and better equipped 4 Series Coupe to attract around 46,000 sales in this country in its seven year lifecycle with 9,000 registrations in its first year on sale.  Traditionally 60% of UK 3 Series Coupe sales have gone to business/fleet customers, 80% are male drivers, the average age of users is 43 to 49 years and around 40% will choose an automatic transmission.

The most popular engine in the new range is expected to be the 420d which is the current range starter model with SE specification priced at £31,575. With the same engine in the likely best selling M Sport specification the price is £34,575.   Around 36% of 4 Series Coupe sales will be 420d powered models. Currently the price list, showing additional versions to come, lists no less than 17 derivatives. Published prices to date top-out at £41,435 for the 435i M Sport. An M4 Coupe is also expected to join the range in the future.

There are three engines available from launch – the 2.0-litre four-cylinder 428i, 245hp petrol unit, the 420d, 184hp turbodiesel, and the 3.0-litre six-cylinder 435i, 306hp petrol unit.  All are direct-injection, turbocharged engines delivering impressive torque from low revs for optimum response.

The 400Nm maximum torque of the 435i is available uninterrupted from 1,200rpm to 5,000rpm, aided by a combination of variable valve control and twin scroll turbocharging. The same combination, along with Double-VANOS variable camshaft control, appears in the

There is a six speed manual gearbox as standard but all versions will be available with an optional eight-speed Sport automatic transmission which includes a launch control function and manual shifting via steering wheel-mounted paddles. In every case fuel consumption and CO2 emissions are lower for the automatic model – down to only121g/km in the case of the 420d.  In most cases this reduces VED road tax and Benefit-in-Kind tax reductions for company car drivers ranging from 1 to 3%.

The three additional engines due to go into production in November 2013 are the 184hp 2.0-litre four-cylinder 420i petrol and two 3.0-litre six-cylinder diesels – the 258hp 430d and the most powerful 4 Series model, the 313hp 435d xDrive. Both six-cylinder diesels come as standard with the eight-speed Sport automatic transmission, while the 435d includes the xDrive intelligent all-wheel-drive system as standard.

Complementing the range of engine options is a wide choice of specification levels and options. The five trim levels are SE, Sport, Modern, Luxury and M Sport and all provide considerably higher levels of equipment upgrades over the outgoing 3 Series Coupe.   Although the 4 Series Coupe costs slightly more than the 3 Series Coupe it replaces the newcomer carries a far higher level of specification.  As an example SE versions with the   first three engines on offer costs between £540 and £810 more, but the value of the added equipment ranges from £1,475 to £2,110.

Above SE are four more levels of equipment. Sport costs £1,500 more as does the Modern level whilst Luxury adds £2,500 to the price and the best selling M Sport pushes the price up by £3,000.  Above those costs is the usual wide range of other options which include BMW Professional Multimedia Navigation, head-up display function, park assist and active cruise control.

In addition to more equipment and improved performance the fourth-generation sporty, mid-sized coupe has big improvements in its dimensions over the outgoing 3 Series Coupe. The new car has a 50mm longer wheelbase within an overall length increase of 26mm. It is 43mm wider with track widths increased by 45mm at the front and 81mm at the rear. For the first time in a midsized BMW coupe the rear wheel arches are the widest point of the car. The roofline is 16mm lower, and as a result of lowered suspension on all models the 4 Series Coupe has the lowest centre of gravity of any current BMW.

The typical BMW coupe design elements of short overhangs, a long bonnet, a set-back passenger compartment, shallow frameless side windows leading into the signature Hofmeister kink on each C-pillar and a flowing roofline, result in a muscular and stretched silhouette.

The slightly forward-leaning double kidney grille and twin round circular headlights make the new 4 Series Coupe instantly recognisable as a BMW. The rear also emphasises the increased track width through prominent horizontal lines and stretched L-shaped LED taillights on the outer extremes of the car. The overall design shows sporting intent but now in a longer Grand Tourer, higher status and imposing way. 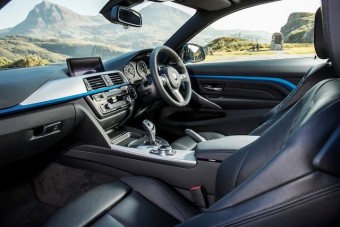 There are automatic seatbelt feeders for the front occupants, while the rear bench seats have been designed with moulded side supports and integrated head restraints to look like two individual seats.

At the rear the boot is larger as well and now offers 445-litres of space. The rear seats also fold to give extra load space for those long distance touring holidays for two. The extra rear seat legroom is very welcome, the rear headroom is still limited for adults and of course access to the rear seats for adults is always a compromise.

The exiting 3 Series Coupe was a big sales success in the UK but all round and in all ways the replacement 4 Series Coupe will be a much more formidable and sophisticated competitor against the likes of the Audi A5 Coupe and the Mercedes-Benz C-Class Coupe.

Given that a high proportion of 4 Series Coupe owners will come from the highly taxed business sector, the 420d will be by far the most tax efficient engine on offer.  But tax and fuel efficiency doesn’t mean weedy performance out-of-step with the imposing looks of the new Coupe.

Top speed is 149mph, zero to 62mph takes 7.5 seconds with the 6-speed manual gearbox.  Officially this engine will return 60.1mpg in the Combined Cycle, our fleet-of-foot test driving over traffic free mountain roads returned an impressive 55.9mpg.  With CO2 emissions of 124g/km VED road tax is £0 for the First Year rate and then only £105 for the second year onwards, which for a Coupe of this size, value and image is really nothing.  Company car drivers will pay 19% in Benefit-in-Kind tax, again very little for a premium brand Coupe of this stature. With 184hp on tap the engine is strong, being critical it can sound a little course when pushed really hard but  the more than ample torque of 380Nm (280lb ft)  from just 1,750rpm makes it very responsive with  real ‘grunt’ when needed accelerating from low speeds with minimal gearchanges.

To be honest this engine with the starter SE specification seems to me to be the most sensible and cost effective version to buy.  The spec really lacks nothing that important and even includes leather upholstery.  I know BMW like selling much more profitable high spec versions but in these frugal times why pay more in price or company car tax than is needed? BIK tax just doesn’t depend on CO2 emissions it is affected by the car’s purchase price, the higher the price the higher the personal tax.

For the record the more powerful 435i M Sport petrol version with 306hp and only a relatively small amount of extra torque over the 420d, at 400Nm (295lb ft)  delivered from 2,000rpm  doesn’t bring any huge advantages. It’s quieter but the 155mph top speed is not really relevant. 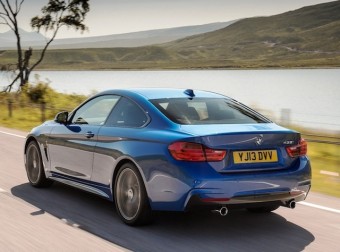 The zero to 62mph time of 5.4 seconds for the manual version will appeal to some users but again for most of the time, given our road conditions, that will not be that important. Officially this sporty engine will return 35.8mpg for the Combined Cycle but it only returned 27.6mpg for my test drive using the same roads and conditions as the 420d.  The CO2 emissions of 185g/km means VED road tax is £335 for the First Year rate and £220 for the second year onwards and company car drivers will pay 29% BIK tax.

The ride comfort and handling, given the pace of our test driving, was impressive with both versions thanks to their rear wheel drive layout, 50/50 weight distribution and low centre of gravity.  Despite its growth in size the 4 Series Coupe is as agile as its predecessor, its better equipped, roomier and looks a much more imposing and prestigious range over the 3 Series Coupe that has done so well for UK sales.

Against: Rear seat access and headroom for adults is still limited, road noise intrusion, restricted space between the clutch and footrest.