You are here: Home / Newcomers / Cars / Bentley Flying B gets new wings 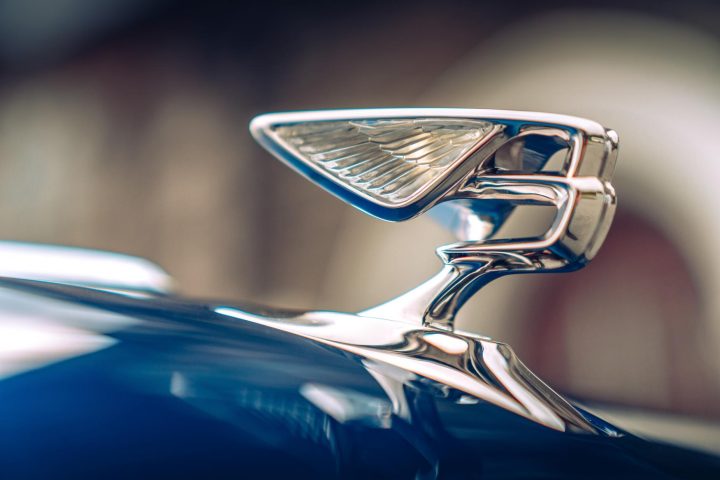 One of the motoring world’s most iconic symbols has just got new wings, and lights.

Almost 90 years after it first appeared on a Bentley, the famous Flying B mascot has been dramatically updated.

It’s expected to be unveiled at Frankfurt Motor Show in a few days in the region of £150,000 or thereabouts.

Bentley’s iconic ‘Flying B’ mascot will adorn the all-new Flying Spur, the first time it has featured on a modern-day edition of the British luxury marque’s four-door Grand Tourer.

Newly-designed for the next century, the electronically-deployed, hood-mounted mascot rises from beneath a modern Bentley badge, underlining the peerless quality of the third generation of the Flying Spur.

Looking to the future of luxury mobility, the famous mascot also adorns the EXP 100 GT, where the smart, illuminated Flying B comes to life as one approaches the car, light playing across the grille, through the mascot and along the bonnet central spine of the car and into the cabin itself.

The upright, Flying B was first employed almost 90 years ago on a 1930 model 8 Litre. The mascot wasn’t a standard fit in those days but available to customers as an option, for the princely sum of five guineas.

The original mascot complemented the flat, winged B badge commissioned by company founder W.O. Bentley himself when Bentley Motors was launched in 1919, exactly 100 years ago.

In Bentley’s Centenary year, the mascot has been restyled for the next century and is an evolution of previous designs. On the new Flying Spur, it is electronically-controlled and illuminated, linked to the welcome lighting sequence and keyless entry system as the driver approaches the car.

Powered by an advanced version of Bentley’s renowned 6.0-litre, twin-turbocharged W12 engine, the Flying Spur is available to order from this Autumn, with customer deliveries beginning in 2020.