You are here: Home / Roadtests / At last, Honda has a credible Civic diesel to take on rivals 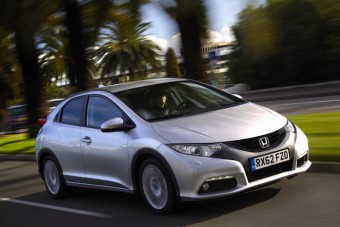 Although Honda is the world’s largest manufacturer of combustion engines, everything from garden equipment to outboard motors, to motorcycles to cars  and many more including a new F1 engine, it was only 10 years ago they introduced their first diesel engine, a 2.2-litre four cylinder unit initially for their Accord range.

This engine then went into their CR-V off-roader and latterly into the Civic C-segment range.

However a 2.2-litre diesel engine has not triggered the much needed sales both from retail and fleet buyers across Europe because of its relatively large capacity at a time when most volume manufacturers are down-sizing engine capacities to reduce CO2 emissions, improve fuel economy and lower taxes.

Finally Honda has developed a much needed 1.6-litre, four cylinder turbodiesel engine and it has immediately improved the sales potential of the British built Civic five door hatchback in Europe.  This engine will also go into the future Civic estate and will become an option in the CR-V range later this year.

Like the Civic itself, the new engine is built at Honda’s Swindon factory where lack of demand from the recession hit European markets in recent years has hit production and in turn reduced the headcount of employees.  The new 1.6-litre diesel should now give demand for the Civic a huge boost and the Civic itself now has a higher competitive profile thanks to its success in Touring Car racing. 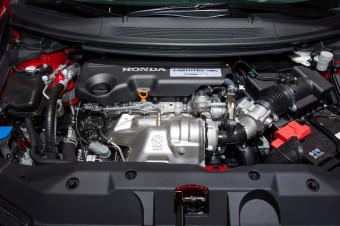 The new all-aluminium, lightweight1.6-litre, 118bhp, four cylinder turbodiesel engine offers impressive credentials with headline CO2 emissions of 94g/km which in the UK means no VED road tax, company car drivers will pay only 13% Benefit-in-Kind tax and the official Combined Cycle fuel consumption figure is 78.5mpg.  On my week long test drive using all types of roads and driving conditions the Civic 1.6 i-DTEC ES variant returned 62.3mpg, short of the official figure but still impressive in real-life conditions.  And the performance is not shabby either with a top speed of 129mph and a zero to 62mph acceleration time of 10.5 seconds.

It’s the flexibility the new Honda 1.6-litre turbodiesel offers that scored highly for me.  With 221lb ft of torque from 2,000rpm, it felt strong and responsive right through the rev range and rarely needed to exceed 3,000rpm. It didn’t require numerous changes down the six-speed gearbox to get the engine to respond for brisk overtaking, push the throttle and the power was there.  Even with the ‘tall’ sixth gear ratio there was plenty of torque not to need to change to fifth gear to accelerate from mid to higher range speeds, even when the engine was in ECO mode setting, where I left it all the time because there wasn’t a need to do anything else.

The engine is so flexible that even at 35mph the car was happy to bowl along in top gear making it fuss-free and economical driving.  The 62+mpg test drive figure was no soft-footed driving from me, just the usual stop and start commute acceleration and dawdle plus 70mph motorway cruising. With a bit more care I’m sure 70mpg is possible. The engine really impressed me, so did the really slick six-speed gearchange.

I have delivered in the recent past my comments about other aspects of the latest generation Civic but I will recap the main points.  The softer suspension settings recently adopted have gone a long way to improve the ride quality and only the worst of the ripples and potholes now intrude on ride comfort. Unfortunately the electronic power steering, although tuned for sharper response, is still as dull as ever giving virtually no feedback to the driver.  Although light, so it’s easy to manoeuvre at low speeds, its lacks the ability to weight-up at mid to high speeds so it provides little communication as to how much cornering grip there is from the front wheels. 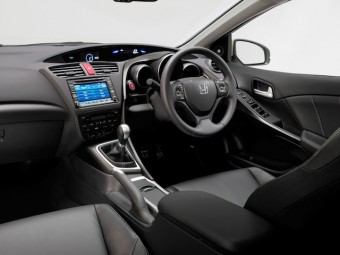 The edgy sports styling of the five door hatchback Civic with its coupe silhouette side profile has grown on me over the years and after the latest updates it looks less radical. It is distinctive and that is appealing. However the low roofline means headroom, especially in the rear and through the front doors, is very tight for six footers.

The rear seat legroom is also stingy which is a shame because the boot and load area is huge for a car of this size with 477-litre of boot space with the rear seats in place and 1,378-litres with them folded down.  The rear split seats fold down really easily so that is a bonus, however the rear tailgate with its split rear windows does nothing for rear visibility.

The front interior is twin cockpit style and still very futuristic in design. The controls are well laid out and easy to use once the driver is familiar with their location and the instrument panel lights which change from blue to green to prompt ECO driving is useful rather than intrusive.
As for specification, the mid range ES I tried just about meets requirements. It is not as comprehensive as competitor Korean brands but by no means does it look or feel under-specced. 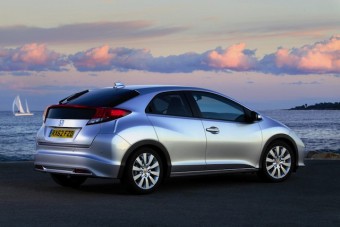 The latest Honda Civic remains good in parts, except for the new 1.6-litre turbodiesel engine which excels in this segment and that now ensures that customers, retail or fleet, should give it serious consideration when buying or leasing a mid-sized family/business car.