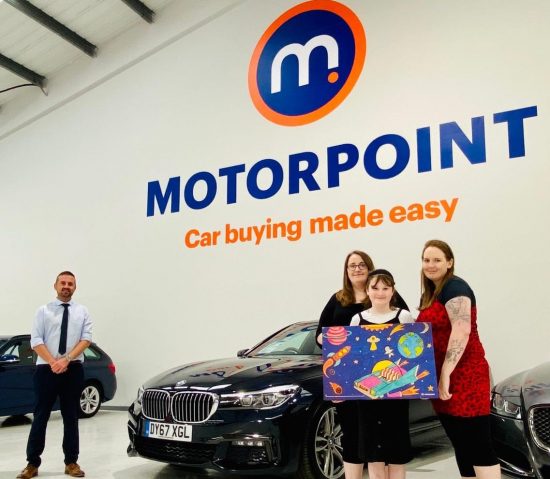 The 36 year old, who lives with her partner Lois, and 11 year-old daughter Cerys in Llanelli, was one of dozens of budding artists from across South West Wales who put pen to paper during lockdown in a bid to claim £250 Amazon vouchers and a framed version of their design.

Motorpoint, which opened its doors to customers in Swansea in late January 2020, recently took over the sponsorship of the Leigh and Claire Breakfast Show on The Wave and as part of its support for families during lockdown teamed up the hosts to launch the competition in May.

The response was overwhelming with entrants from Carmathen, Llanelli, Neath, Port Talbot and Swansea among other places.

Sian explained, “We’re always drawing as a family and when I heard about the competition with Leigh and Claire on The Wave I said to everyone ‘let’s enter it’.

“Our design took us a couple of hours to complete and we were really happy with it but we never thought for one minute that we’d actually win. We’re already working out what to spend the Amazon vouchers on, we’ve got four cats and a dog, so probably something to do with animals if Cerys has her way.”

Sian added, “We absolutely love the fact our design has been turned into a print. It’s already got pride of place on the wall in our living room at home!”

Andrew Davies, General Sales Manager of Motorpoint Swansea, concluded, “It was really hard to choose a favourite, because of the all entries were so good, but Sian’s design stood out to the whole team at Motorpoint, and it was a pleasure to crown them worthy winners down at the branch in Llansamlet.”