You are here: Home / First Drives / All change for summer with Suzuki Swift series 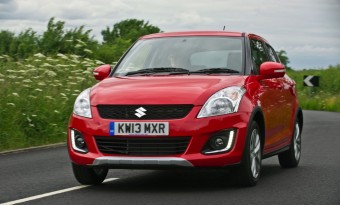 There are new five-door body features and styling, a new deep blue colour and the addition of new trim, while underneath there are revised powertrains with greener and cheaper to tax models as the Swift tones up for the September sales fight.

Significantly as autumn and winter approach, the range is boosted by the inclusion of the Swift 4×4, which has been doing well in Germany and Switzerland, and it comes with the latest five-door body and 4cylinder 94ps 1.2 engine with 5sp manual gearbox and self-sensing on demand all wheel drive using a viscous coupling to the rear wheels.

There are two 4×4 trim levels with a higher ride height in the SZ3 than the standard car and the SZ4 gains under-body skid plates and black detailing around the wheel arches and side skirts. The 4×4 owners can also utilise a dealer holding and fitting winter-tyres programme to aid grip and reduce tyre wear.

Suzuki believe their latest Swift 4×4 will have particularly good appeal to country dwellers and those who have to keep going in harsh conditions but who do not need the size or cost of a big off-roader.

The 1.2 petrol engines continue as before and remain amongst the lowest polluting in their class while the 75ps 1.3 diesel has undergone some changes to its efficiency to reduce emissions to 101gkm and costs £20 road tax. 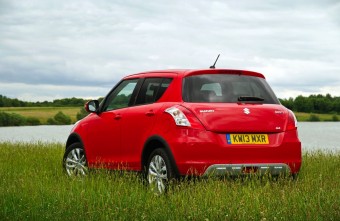 The new range can be distinguished from the previous series with new bumper and grille, revised rear end incorporating a high level LED for the brakes and new wheel covers, front fog lamps depending on trim grade.

Inside there are no significant changes and boot capacity remains 211 – 528 litres, but 4×4 models now lose two-litres fuel tank capacity to accommodate the viscous differential underneath and it has a 40 litres tank.

With the additional doors now going into the Swift Sport, which has been on sale since January with three-doors, it also gets the new high level rear brake light and auto-up feature to the driver’s door window as well as a Boost Blue colour choice.

There is no change to the powertrain so the 16 litre multi-valve engine gives it a 0-62mph time of 87 sec and maximum 121mph and it comes with air conditioning, keyless starting, Bluetooth, high performance head and fog lights and shaded rear glass.

It gets sports suspension, close-ratio gearbox and tuned engine to optimise the driving experience for owners.

Suzuki UK product manager Ed Norman said that while the company currently has a low percentage of British sales it is growing and by the end of 2013 it expects to deliver 30,000 models, including 2,000 Swift.

He said, “The key for us is growing the fleet market, not by pushing sales with low profits, but by organic growth and finding the business channels which are profitable and not going to impact on future expansion.”

Norman added that the introduction of new models each year over the next four years would help grow registrations and widen the appeal of Suzuki to buyers who may not have considered them before as they did not have suitable products. 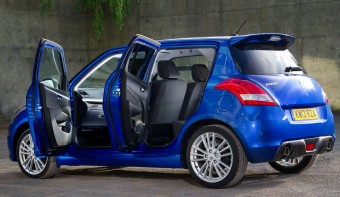 Dealers will not be under pressure to push buyers into schemes and finance deals they do not traditionally feel comfortable with and the comparatively small size of Suzuki UK – it employs under 140 – means they can offer a more personal service to their 145 dealers and customers as well, he said.

In the first half of 2013, Suzuki UK has seen sales rise 34pc and it’s the best performing in Europe, overtaking Germany, and he added, “Our intention is to maintain our 1.5pc market share in the UK and we are well on track to do that.”

Swift is their best seller since it was launched in 1984 and accounts for about a third of registrations in that time.

We were able to give the 1.2 Swift 4×4 a reasonable test on unmade roads in forestry between Glyn Ceiriog and Llangollen, North Wales and it handled well.

The modest ground clearance was no compromise crossing potholes and ridges made by logging trucks and its smart pick up was appreciated when the surface improved.

On twisting single-track metalled roads it also gripped well and admirably coped with some testing tight turns under the shadow of Castell Dinas Bran.

It pulled reasonably well one-up but needed judicious use of the 5sp gearbox in certain situations and sometimes I found myself wishing it had another gear under hand to improve on the 38.6mpg achieved.

Because it did not have to be pushed as hard as its sibling to perform, the 136ps 1.6 six-speed Swift Sport five-door returned 46.9mpg on sweeping roads up the Horseshoe Pass, through North East Wales and across the Cheshire Plain.

The added practicality of five-doors will widen appeal without detracting from performance which can be readily, easily and safely enjoyed. At £14,249, it costs £500 more than the Sport three-door, which is still expected to remain the better seller of the two.

Both test cars were neatly detailed inside and had good room, rode well and provided good visibility to maximize performance, but I thought the 1.2 in particular suffered from a lot of road noise.

Against: Ground clearance not exceptional, road noise, boot space when used with all seats occupied.