On 12 November 2020, permission was granted to join up existing dual carriageways on the A303 in Wiltshire via a new dual carriageway section, running via a twin-bore four-lane road tunnel just south of Stonehenge, writes Dave Moss. 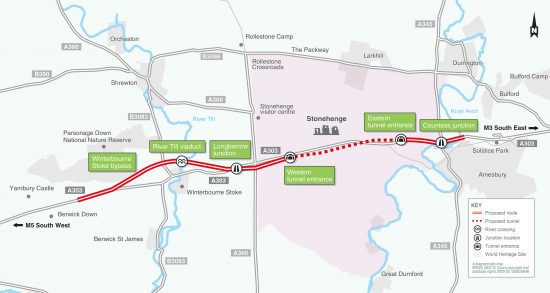 The decision reignited controversy smouldering for over 50 years, though since 2000, anger and frustration have grown exponentially concerning the 8 mile section of single carriageway road hereabouts, where drivers suffer time-consuming delays, and growing traffic threatens a unique world heritage site on several fronts.

Nearby, residents of Winterborne Stoke have seen their village effectively split in two by daily heavy traffic; for them, replacement of the single carriageway road linking the Countess roundabout near Amesbury with the existing dual carriageway west of their community is long overdue.

These problem stem from 1922, when Britain’s A and B road numbering system was introduced. The A30 was deemed the main London to Land’s End route, winding sinuously through increasingly picturesque countryside, connecting and traversing major towns along the way.

These characteristics prevented easy upgrade into a high speed south-west-bound route to accommodate rapidly growing 1960’s traffic, so attention then turned to an alternative westbound route, already assembled from various early cross-country turnpike roads… one of which passed Stonehenge.

Nonetheless, almost 90 years on, over 35 miles of the A303 still awaits upgrading, and the project near Stonehenge is among eight schemes announced in 2014, intended to eventually complete a dual carriageway link to the M5 outside Taunton.

In 1950, British roads carried just 3.9m vehicles. Since then, public acknowledgement of the long under-appreciated environmental effect new infrastructure built to accommodate rising vehicle numbers can have has lagged far behind actual traffic growth. Traditionally also, traffic’s impact on the preservation and appreciation of Britain’s countryside and heritage has suffered a similarly low profile.

UNESCO declared the Stonehenge area to be a World Heritage site of Outstanding Universal Value in 1986, describing the preserved prehistoric site and monuments as forming “landscapes without parallel”.

In 1992, as the A303 grew into a major south west artery, and vehicle numbers hovered around 25 million, a tunnel to “solve” traffic’s intrusion into the Stonehenge landscape was first mooted. The same year, “Swampy” was making national headlines – digging in against bulldozers, attempting to stop a new Honiton to Exeter dual carriageway.

Today, official assumptions, assertions and decisions can be competently reviewed and robustly challenged; not that long ago such official “data” usually allowed trunk road development to proceed almost unhindered. The relatively recent requirement for formal public inquiries into major roadbuilding projects – a move partly propagated by pressure from objectors – has changed that forever.

It also acknowledges the powerful arguments which support removing the road from its present, highly visible, 1½ mile (2.5km) alignment, passing just 200 yards (183metres) from the monument itself. 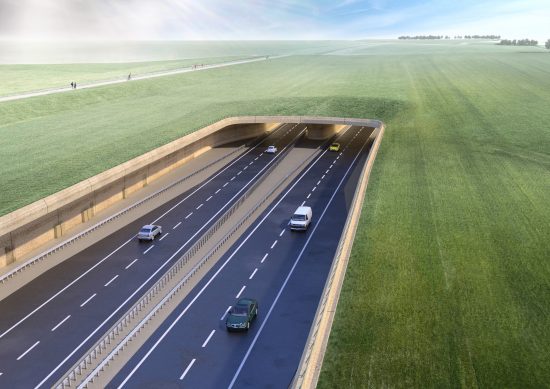 The case for a tunnel to remove the sight, sound, and smell of traffic from the historic Stonehenge landscape appears compelling, and Highways England – and its predecessors – have spent years, and much taxpayer cash, investigating, researching, and consulting on re-routing this road.

The recently approved project was designed to address congestion, noise and pollution issues, and provide local communities with relief from traffic pressures. Its 8 mile (12.9 km) route was developed around detailed heritage, environmental and economic inputs, and, with £1.6bn government funding, is centred on a 2.1mile (3.4km) four-lane tunnel, with access roads integrated into existing dual carriageways, and incorporating two new major junctions.

The project was recommended for refusal by the Planning Inspectorate’s five independent inspectors, who, amongst other things, cited potential for “substantial harm” to the cultural heritage, landscape, and visual impact around Stonehenge.

Their view was that the project “would permanently harm the integrity of the site as a whole, and seriously harm its authenticity”. Despite this, Transport Secretary Grant Shapps approved it – and promptly polarised long-divided expert opinion.

The National Trust feels that diverting the road underground will enhance the site, and Historic England is also supportive, while English Heritage stated the announcement was a “landmark day for Stonehenge”.

Unsurprisingly, Highways England also welcomed the decision. It predicts benefits ranging from the practical – faster, safer, more reliable journeys with fewer accidents – through unlocking south west economic development, to the pastoral: restoring tranquillity to the Stonehenge setting, and allowing visitors to explore and enjoy the whole landscape through new bridleways and byways.

Other claimed benefits include biodiversity enhancement, new rights of way for cyclists, walkers and horse-riders, and reinstatement of the chalk downland landscape.

A line-up of experts, campaigners and organisations were however unimpressed, with the press reporting concerns over aspects of the plans, insufficient supporting archaeological work, the decision to over-ride the expert recommendation to withhold consent – and more. The British Archaeological Trust, the independent Stonehenge Alliance pressure group, and an assortment of leading archaeologists, campaigners and Druids were amongst those most alarmed by the decision.

Though the expert voices raised in protest are surprisingly diverse, two common threads are discernible. First, concern over what’s seen as potentially irreversible desecration and damage to presently undiscovered archaeology – across a vast site ranging far beyond Stonehenge itself.

Here, Highways England points to the appointment of experienced archaeology and heritage services company Wessex Archaeology as lead contractor for this work. 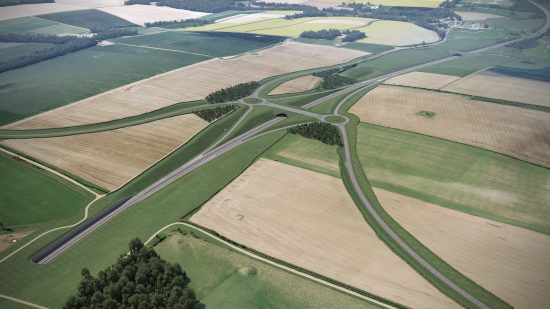 The company has been researching and interpreting the site and its landscape since the 1980’s, including earlier stages of the A303 project. An experienced team has been assembled to excavate, record and analyse the archaeology, largely before construction work begins.

A second thread supports a longer, 3½ mile (5.5km) tunnel under the entire site, including a completely redesigned A360 junction. It’s favoured by those wanting optimum tranquillity, uninterrupted sightlines – and guaranteed protection for unexplored, hidden history and heritage.

Backed by a detailed case, it claimed the Secretary of State failed to follow national policy, and breached international law under the World Heritage Convention.

The challenge was successful, and the case is due to be heard over three days starting on 23 June. A High Court judge has decided that the legal arguments put forward concerning Transport Secretary Grant Shapps’ decision to allow the project will be dealt with at a “rolled up” hearing, where the Court will decide both whether the claim is arguable, and, if it is, whether it will succeed.

Save Stonehenge World Heritage Site Ltd have increased their fundraising target by £20,000 to finance their High Court hearing. Nowork will start on the site until the legal processes are completed.

Highways England issued this release after the decision to proceed was announced:

The British Archaeological Trust issued this release after the decision to proceed:

Everything you need to know about the Stonehenge Alliance Pressure group’s campaign is here https://stonehengealliance.org.uk/our-campaign/the-stonehenge-saga/

The full report and recommendations submitted to the Secretary of State on 2nd January 2020, as published by the Planning Inspectorate on 12 November 2020 following the Transport Secretary’s decision. can be found here

A key report document: Appendix E.  “Additional matters for the Consideration of the Secretary of State in the event that the Development Consent is granted for the proposed development.” is here Appendices

The Department for Digital, Culture, Media and Sport made submissions to the Public inquiry. They are here in PDF format 12 August 2019 and 2 October 2019.

Highways England’s announcement about the appointment of Wessex Archaeology:

Highways England’s news releases on the Stonehenge project are here:

Details of the protestors’ bid to obtain a Judicial review are here:

Announcement that the application for a judicial review had been successful: