The uniquely rebodied Ferrari 250 GT, conservatively valued at $30M, crashed backwards into the protective tyre wall on the Mulsanne straight during the race. No other car was involved, and the accident could have been brake related.

In July 2021 the distinctive red GT scored an emphatic victory in the blue-riband RAC Tourist Trophy race for pre 1963 GT cars at the Silverstone Classic (below). 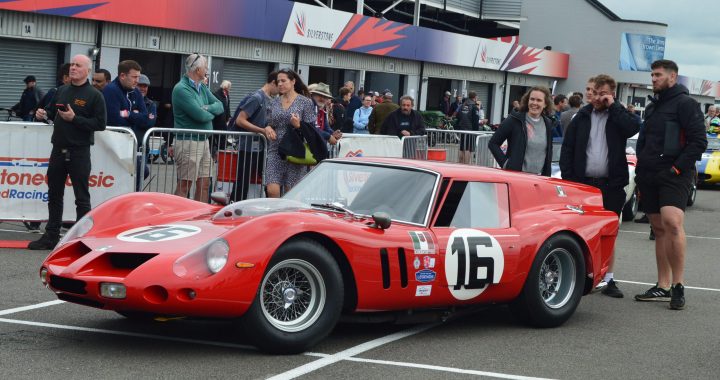 Having originated from events generated by Enzo Ferrari’s often fickle personality, in period the French media called the distinctive one-off La Camionnette or little truck, but neither this nor its ‘Breadvan’ sobriquet allotted by the international media told the true story.

When the car first appeared for the 1962 Le Mans 24-Hour, Ferrari had just progressed from the 250 GT SWB to the 250 GTO SWB race car, but “il Commendatore” coolly refused to sell any GTOs to Count Giovanni Volpi after he employed several key employees’ that signor Ferrari had unceremoniously sacked! Enzo’s actions escalated Volpi’s objectives into a burning desire to destroy Ferrari on the racetrack using his new Scuderia Serenissima racing team and car company.

As a result, the Venetian multimillionaire nobleman commissioned Piero Drogo and Giotto Bizzarrini to design the exclusive car based on a 1961 Ferrari 250 GT SWB chassis, which Volopi acquired from a third-party. The enormous engineering and design effort put into creating the iconic Kamm-tailed ‘Breadvan’ resulted in it being faster than Ferrari’s 250 GTO, but it retired with a broken driveshaft in the 4th hour while running 7th, driven by Colin Davis and Carlo Maria Abate. Almost sixty years on, the ‘Breadvan’ was driven to within an inch of its £20M life by Lucas Halusa to score the emphatic Silverstone TT victory.

Once again 31-year old Lucas was behind the wheel at the time of the Le Mans Classic accident, but the son of the car’s owner escaped uninjured and was able to climb over the tyre barrier to safety unaided after the 250’s passenger side and elegant rear-end slammed into the barrier, briefly lifting the car up onto two wheels and it will obviously need some significant repairs before it makes a return to the racetrack. 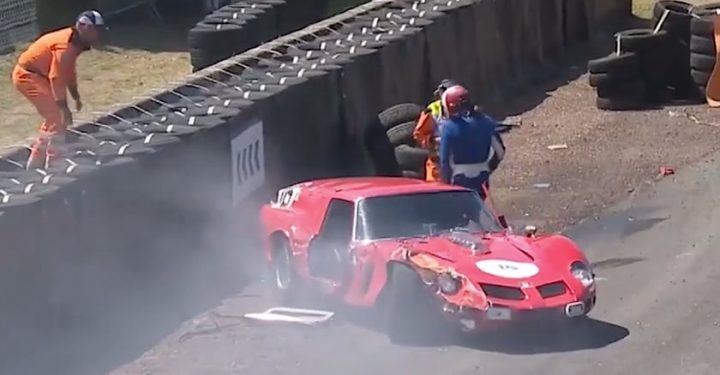 Until a detailed assessment is carried out, it’s unclear just how much damage was done to the Ferrari, but the passenger-side door was ripped off in the crash. Additionally, the front quarter panel and bumper are badly mangled and it’s highly likely that both front and rear passenger side suspension and even chassis members have sustained damage.

Commendably, the charismatic Ferrari has continued to race some 60 years after its first appearance at Le Mans and this isn’t the first time it has been crashed.

In 2015, the ‘Breadvan’, estimated worth $23 million at that time, collided with a $12 million Shelby Daytona Cobra Coupe during the Goodwood Revival race meeting in Sussex, but that incident wasn’t as severe as Le Mans, with the car only suffering relatively superficial front bumper and headlight damage.

Given that the car’s discerning owner is willing to race his $30 million investment, there’s no doubt he will have the means – and possibly insurance cover – to effect successful repairs and in 2022 nothing is irreparable as history proves with even the most severely damaged cars reappearing on the track better than new.

Historic motor racing enthusiasts the world over send their encouragement for a swift repair and the ‘Breadvan’s’ much anticipated reappearance on the world historic GT racing stage.