You are here: Home / Motorsport / Power takes glory on Anglesey 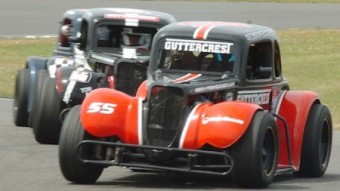 Mid Wales racing driver Ben Power stormed to victory in the televised Guttercrest Cup at Anglesey Circuit, as he took the honours in the latest round of the National Legends Car racing championship.

Power, aged 25, from Guilsfield, near Welshpool, finished seventh and third in the heats, but beat a 27-car grid to win the final, taking the overall win and lifting the inaugural Guttercrest Cup..

“It was a brilliant day’s racing,” said Power, who lies second in the UK championship series. “The TV cameras were there, and we were sponsoring the day, so we had a lot of support there.”The races are due to be shown on Motors TV on 13 August.