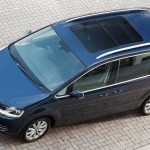 The Volkswagen Sharan is an enduring model in the MPV sector which has seen models come and go. Twenty years after it was launched, the Volkswagen Sharan shares only the name with the first generation, and today’s popular MPV is significantly bigger and roomier.   Originally a joint venture with Ford from 1995 to 2009, the new second generation Sharan is based on the floorpan of the … END_OF_DOCUMENT_TOKEN_TO_BE_REPLACED