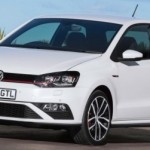 There is a stronger flavour to the latest Volkswagen Polo GTI.The original Polo appeared in 1985 and broke new ground for VW as a small car but it has steadily been updated, improved and strengthened and the latest hot-hatchback version is based on the fourth generation of the series on sale since July 2014.The Polo remains VW’s second best selling range after the Golf. Last year the Golf … END_OF_DOCUMENT_TOKEN_TO_BE_REPLACED