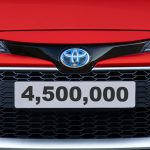 The world’s best selling car and most successful British-built, the Toyota Corolla, goes from strength to strength. Toyota has been building cars in Britain since 1992 when the Burnaston, Derby factory came on stream as Toyota’s first manufacturing centre in Europe. In June it assembled its 4.5M model, a Corolla Hatchback to add to the over 46M Corolla models built worldwide since 1966, … END_OF_DOCUMENT_TOKEN_TO_BE_REPLACED