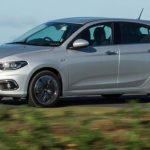 Families know that each generation is usually bigger than the last, and it’s the same with the new Fiat Tipo. Originally announced in 1988, the first generation Tipo remained in production until the mid 1990s but in September 2016 the new model to carry the name was unveiled.   The name was the only familiar feature of the newcomer as it has moved up in size and it offers one of the … END_OF_DOCUMENT_TOKEN_TO_BE_REPLACED