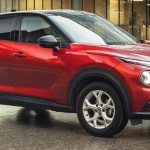 Launched over a decade ago the first generation Nissan Juke sold in huge numbers with over 1.5-million finding global homes,writes David Miles. It brought the then aspirational idea of 5-door SUV styling to the masses of car buyers who previously had opted for supermini sized hatchbacks.   Although prior to Juke there had been small boxy shaped SUVs/4x4s from mainly Japanese manufacturers … END_OF_DOCUMENT_TOKEN_TO_BE_REPLACED