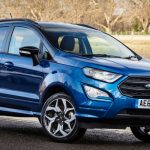 Under the One Ford policy where any model they produced globally, subject to meeting local demand and legislation requirements, could be sold in any market, the EcoSport compact five-door SUV first saw light in 2013 to meet low cost South American markets.   As the compact SUV market grew worldwide for such sized models production was increased with the EcoSport also being built in … END_OF_DOCUMENT_TOKEN_TO_BE_REPLACED 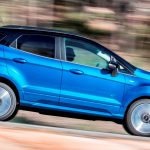 Ford aims to punch above its weight with the latest EcoSport, writes Robin Roberts. It was launched in South America in 2004 but the model we know today is the second generation which appeared in 2012, was updated in 2014 and again in 2017 for global sale, and manufactured in six plants.   Currently in the UK there are nearly 20 versions of the EcoSport in ST-Line, Titanium … END_OF_DOCUMENT_TOKEN_TO_BE_REPLACED