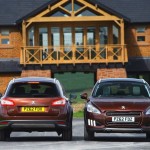 When so many executive cars are the same it takes something special to stand out from the suited ranks, such as the Peugeot 508 Diesel Hybrid4. Introduced in 2012, Peugeot pioneered diesel & electric powertrains under the 3008 in February and quickly expanded into the D-sector with the larger 508 series last May. Under the bonnet is a combined advanced turbo-diesel engine and electric … END_OF_DOCUMENT_TOKEN_TO_BE_REPLACED