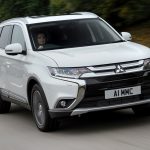 Mitsubishi Motors celebrated their 100th anniversary of car production in 2017 having produced their first car – the Model A in 1907 and their first 4WD model the PX33 in 1933, writes David Miles. Imports first began to Europe beginning in the UK in 1974 with the Lancer and Galant saloons and the first Shogun 4WD range came  in 1983. Today Mitsubishi Motors is part of the Renault-Nissan … END_OF_DOCUMENT_TOKEN_TO_BE_REPLACED