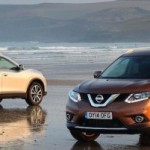 Nissan X-Trail is a car of the millennium and the modern family. Originally launched in 2000, it has evolved with the second generation in 2007 and the current third series from 2013. Four trim levels, 2WD or 4WD, manual or automatic transmission with choice or 1.6 diesel or new petrol engines giving 130 or 163ps should satisfy. With each new series it has been updated and made more relevant … END_OF_DOCUMENT_TOKEN_TO_BE_REPLACED