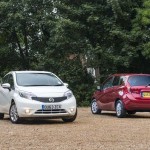 After practically single handedly saving the economy of North East England when it opened a massive car plant in Sunderland, Nissan is now on a mission to save itself.With a reputation for producing some competent but not charismatic cars, Nissan is now pushing back its own boundaries with cutting edge creations which are making rivals scramble to their studios and come up with something to … END_OF_DOCUMENT_TOKEN_TO_BE_REPLACED