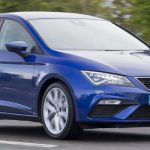 The third-generation evolutionary SEAT Leon is now in showrooms, writes Robin Roberts. With about 70 versions available in three-door coupe, five-door hatch or semi-estate styles it is one of the pillars of the Spanish maker’s range alongside the Ibiza and Ateca. The latest series comes with a new 1.0 litre three-cylinder engine to widen its appeal alongside four other petrol engines and … END_OF_DOCUMENT_TOKEN_TO_BE_REPLACED