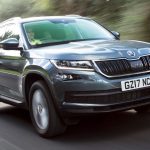 The Skoda Kodiaq marked a turning point for the Czech subsidiary of VW as it launched into the burgeoning SUV sector. From its introduction in 2017 the five and seven seat Kodiaq has picked up numerous awards and was followed with a smaller Karoq SUV, which has also been highly praised. It seems as if Europe and its discriminating drivers have suddenly woken up to the brand which built a … END_OF_DOCUMENT_TOKEN_TO_BE_REPLACED