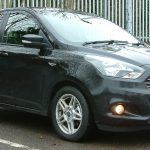 Babies have a habit of growing up, just like the new Ford KA+. From its origins as a compact city car in 1996 we have seen it develop in 2008 into a convertible and sporting model and in 2014 the third generation KA+ was launched with an extra 7.5 inches wheelbase, and it came to the UK in 2016. It is a simple Studio and Zetec trimmed three-car range from under £9,000 to almost £10,300, … END_OF_DOCUMENT_TOKEN_TO_BE_REPLACED