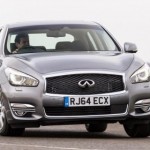 You know you’ve made it when car park attendant Phil asks what is the car he has been puzzling over for an hour or so in the car park he has looked after for 20 years at Port Eynon, Gower. “Never had one in my car park before,” he announced when I explained. He has seen nearly everything, but it was his first Infiniti Q70. Infiniti really is going beyond expectations of some people. In a … END_OF_DOCUMENT_TOKEN_TO_BE_REPLACED