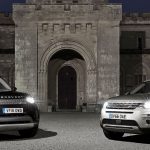 Santa Claus has new helpers he can call on - the latest SUVs from Jaguar and Land Rover, writes David Miles. At the annual Christmas Ride and Drive media event held at Eastnor Castle Herefordshire by Jaguar Land Rover it was announced that the new Jaguar F-Pace SUV launched in April this year is not only Jaguar’s first ever SUV but it has become the fastest selling Jaguar ever. Over 40,000 … END_OF_DOCUMENT_TOKEN_TO_BE_REPLACED