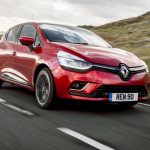 The Renault Clio was launched before the worldwide web became a part of everyday life and after 27 years it’s what is now considered Version 4.2. It’s been a part of the British motoring scene for over a generation, and it keeps reinventing itself. Successive advertising campaigns around each new series have stressed the romance of Renault and with over 1.2 million sold in Britain there is … END_OF_DOCUMENT_TOKEN_TO_BE_REPLACED