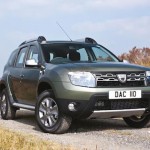 Dacia was bought by Renault in 1999 although the Romanian vehicle brand was formed in 1966. New Dacia has since proved a huge sales hit with European customers because of their value for money credentials. It has been Europe’s fastest growing brand for eight consecutive years and in some markets Dacia models are actually badged as Renaults.  European Union sales for Dacia increased by 24% to … END_OF_DOCUMENT_TOKEN_TO_BE_REPLACED