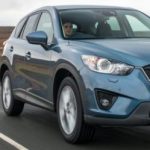 In an industry that thrives on awards and recognition, the trophy for modesty would go to Mazda, writes  Robin RobertsTo many it’s a one-model marque made famous by the sporting MX-5, but in reality and among those in the know, there is a much bigger range behind it including hatchbacks, business executive models, and SUVs.The CX-5 SUV is one of the least known of its type and probably not … END_OF_DOCUMENT_TOKEN_TO_BE_REPLACED