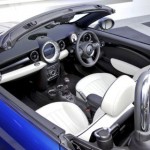 The two seater drop-top Roadster is the sixth model range for the BMW owned Mini range and it's British built. It is being produced alongside the Mini Hatch, Clubman estate, Convertible and two seater Coupé on which it is based. The arrival of the new model sees the assembly plant on the outskirts of Oxford, the press shop in Swindon and the Hams Hall engine factory gain even further in … END_OF_DOCUMENT_TOKEN_TO_BE_REPLACED