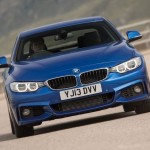 The new BMW  4 Series Coupe makes its World premiere at the Frankfurt motor show in September before going on sale in the UK in October, but for us motoring journos its UK debut was on the near deserted and challenging roads in the north of Scotland. Although the new 4 Series two door Coupe is the replacement for the 3 Series Coupe, the newcomer is based on the recently introduced 3 Series Saloon … END_OF_DOCUMENT_TOKEN_TO_BE_REPLACED